Posted on December 1, 2010 by openwidearchive

In second grade, students study fractions. Students learn how to identify and represent fractions, compare unit fractions, and write fractional values (SOL 2.3). The resources provided below will support instruction during the second grade unit on fractions. 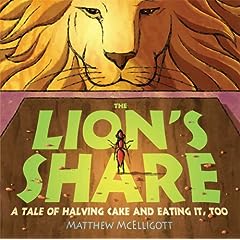 The Lion’s Share: A Tale of Halving Cake and Eating it, too

Written and Illustrated by Matthew McElligott

The Lion’s Share: A Tale of Halving Cake and Eating it, too is a story about an ant that is invited to join the lion’s dinner party. Throughout the dinner the ant observes the other animals’ rude behavior and unwillingness to share fairly. When the lion presents his guests with a large cake, the other animals take turns halving the dessert until there is nothing left but a crumb for the ant and the lion to share. As a gesture of goodwill, the ant offers to bake the lion a new cake. Meanwhile, the other guests refuse to be outdone. They continue to double the ant’s offer until the last guest offers to make 256 cakes! This tale of halving and doubling will help students to visualize the relationship between fractions, multiplication, and division.

The Wishing Club: A Story About Fractions

Written by Donna Jo Napoli and Illustrated by Anna Currey

In  The Wishing Club: A Story About Fractions four children wish on a star. They soon discover that each child only receives a fraction of his or her wish. For example, Petey wishes for a dollar but only receives a quarter. This cycle of fractional wishes continues until Samantha designs a plan. The children work together to combine their fractional values into one whole wish. This book highlights unit fractions, comparing fractions, and adding fractions to create one whole.

Give Me Half! tells the story of two siblings who do not want to share. The mother intervenes and insists that the children share everything equally. She tells her children to divide the food into halves. As the story continues the children learn how to divide solids, liquids, and parts of a set into halves. The illustrations are accompanied by pictorial and numerical representations of the children’s fair shares. For example, a diagram illustrates two halves of a pizza forming one whole. Underneath this illustration the is the number sentence 1/2 + 1/2 = 1 whole. This book will help students visualize the fraction one half in a variety of ways.

Inchworm and a Half

Written by Elinor J. Pinczes and Illustrated by Randall Enos

Inchworm and a Half is a tale about an inchworm that has set out to measure all of the vegetables in her garden. The inchworm’s stride measures one inch in length. Therefore, measuring the garden is as easy as counting her steps. One day the inchworm realizes that one of her measurements is in between two whole numbers. She cannot measure this length with her stride. In order to finish measuring the garden, the inchworm asks for help from the 1/2-inch, 1/3-inch, and 1/4-inch worms. Together they are able to measure the vegetable garden. This book focuses on unit fractions and their relationship to one whole. Written and Illustrated by Loreen Leedy

Fraction Action is divided into five chapters. In each chapter Miss Prime teaches her students about a different aspect of fractions. Her first lesson teaches students about equal parts as well as halves, thirds, and fourths. She emphasizes that any whole shape can be divided into fractions. The second lesson focuses on parts of a set. In this chapter students learn to identify fractional parts of a group. The third chapter highlights the importance of fair shares and equal parts. The next chapter focuses on the relationship between fractions and money. The book concludes with a fraction test. Miss Prime tests her students’ knowledge of fractions through a review game. Each mini lesson could be read aloud throughout the fraction unit. The book’s word problems and puzzles will keep students engaged as they learn about the many uses of fractions.

This entry was posted in math. Bookmark the permalink.