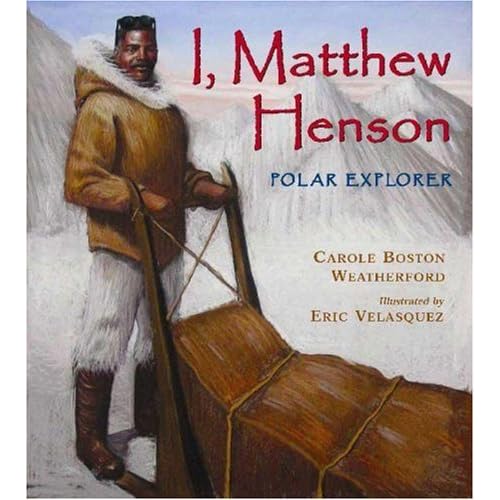 I am always on the lookout for strong biographies to add to my teaching collection. I stumbled across I, Matthew Henson shortly after the new year and after reading just a few pages, knew I had to have it. Here’s how it begins.

I did not walk forty miles
from the nation’s capital
to Baltimore’s busy harbor to eye
ships from a dock. Though just thirteen
I yearned for a taste of the adventures
that I had heard old sailors speak of,
to explore the seven seas
and somehow find my calling.

I did not start as a cabin boy, climb
the ranks to able-bodied seaman,
sail five continents, and learn
trades and foreign tongues to be shunned
by white crews who thought blacks
were not seaworthy. I did not chart
this course to drift in humdrum jobs
ashore. My dreams had sails.

And what dreams they were. In language that is lyrical and poetic, accompanied by vibrant pastels, readers learn how Henson serendipitously met Robert Peary while working as a clerk. Once he signed on with Peary, his life was never the same. In haunting words and images, we are taken north again and again with Henson. The images are stark and help us to understand how arduous these trips were. Henson made this trip seven times between 1891 and 1909. A trip like this would be difficult today, with all our advanced technologies. Knowing this makes the feat accomplished by Henson that much more extraordinary.

In his time with Peary, Henson sailed to Greenland, where he befriended the native peoples, learned the Inuit language, learned to hunt and track on ice, and honed many more skills that would help him eventually reach the North Pole. On April 6, 1909, six men reached the North Pole. One was black, one was white, and fur were native. The text ends here, but the Author’s Note explains that when the explorers returned, they were greeted with controversy. Dr. Frederick Cook, who sailed on an earlier expedition with Henson and Peary, claimed he reached the Pole in 1908. But this was not the only difficulty Henson faced. America was not willing to accept an African American hero in 1909.

It took years for Henson to achieve the recognition he deserved. In 1944 he was finally awarded duplicate of the Congressional silver medal given to Peary. In 1988 he was moved to Arlington National Cemetery, where he is buried beside Peary.

This book works on many levels, not only because of the beauty of the writing, but also the strength of the illustrations. I can’t say enough about how lovely this book is. I highly recommend it.

To learn more about the author, be sure to visit The Brown Bookshelf. As part of their 28 Days Later project, Carole Boston Weatherford will be featured on February 20th. And if you didn’t know it, Weatherford’s book Birmingham, 1963 was just awarded the 2008 Lee Bennett Hopkins Poetry Award.

This review was written for Nonfiction Monday. Head on over to Anastasia Suen’s blog and check out the round-up of posts.