Throughout 19th American history, minstrel shows served several purposes. Firstly, they exploited exaggerated and made up notions regarding the black population for the sake of entertainment (Muhammad 311). The different characters, often played by northern-born or foreign white men in black face, provided a variety of archetypes for white Americans to categorize slaves and black people in general (LaGrone 118). Though many characters appeared throughout the history of minstrelsy, three of the most common archetypes were Jim Crow, the Sambo, and Zip Coon. In addition to those three archetypes, minstrelsy also perpetuated the idea that slavery domesticated black people, turning them from savages into happy, obedient servants. Jim Crow, whose name originated from a shuffle-like dance where you don’t cross your feet, depicted the carefree slave. This character evolved into the Sambo: A singing and dancing figure that “proved” slaves were happiest when serving their white masters (Riggs 1987). Zip Coon represented free slaves from the north and was used as an argument against the possibility of racial equality, as he was often depicted as a materialistic buffoon who lacked social graces (Muhammad 312). 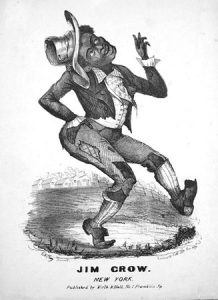 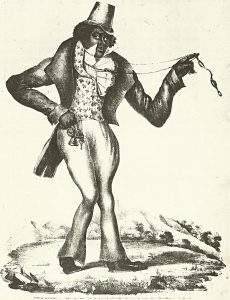 Moreover, minstrel shows were also utilized to spread propaganda. As abolitionism gained momentum, minstrelsy served as a justification of slavery, portraying slaves best suited for the plantation, insinuating that they would be lost and incapable if freed (Muhammad 311). The popularity of minstrels lasted well into the 20th century, particularly with the radio show Amos ’n Andy (LaGrone 118). The radio show was wildly popular, and was adapted for television in the 1950s. Though the actors used for the TV series were black, the white originators of the show gave the black actors directions for how to “act black” based on minstrel traditions (LaGrone 119). But when the Civil Rights Movement began, American society’s idea of the black man had to shift. As black American’s fought for political and social justice, a new archetype for white people to consider black people emerged. At this time, popular films and the media often depicted black people, in particular black men, as militant, vocal, and angry (LaGrone 119).

Following the Civil Rights Movement, minority groups in the US continued to face a disproportionate amount of struggles. In South Central LA specifically, social and environmental pressures severely impacted lower income communities. From factories closing and laying off employees in the ‘60s, to rapid population increases in the ‘70s, to deindustrialization, LA was incredibly vulnerable and enabled by the mobility of capital. With the rise of the automobile industry and the construction of the freeway system, the excitement of newly accessible opportunities hid the isolation and dilapidation of poorer LA neighborhoods, like Compton. As a result, there was increased crime, violence, underground drug activity, and overall chaos in those communities. These issues lead to an aggressive response by the LAPD, who sought to control the violence and sale of drugs with tactics such as search-and-seizure round ups and intimidation (Kajikawa 88).

This tension prompted a need for an expressive outlet amongst black youth, a sentiment that contributed to the rise in popularity of gangsta rap. However, with this controversial genre came problematic representations of black Americans. Two popular gangsta rap groups, N.W.A. and Public Enemy, exemplify several different gangsta rapper personas that are reminiscent of minstrel archetypes. In N.W.A.’s “Appetite for Destruction” and Public Enemy’s “Fight the Power,” the embodiment of characteristics reminiscent of minstrel archetypes, though effective in attracting interest from mainstream audiences, contributed to the perpetuation of negative stereotypes surrounding African Americans. Nearly 30 years later, Childish Gambino was able to challenge these long held notions head on, as well as comment on discrimination against African Americans in a way N.W.A. and Public Enemy could not. 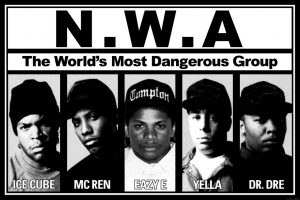 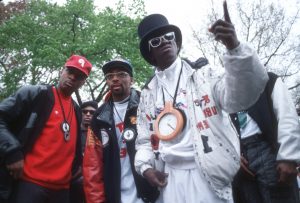