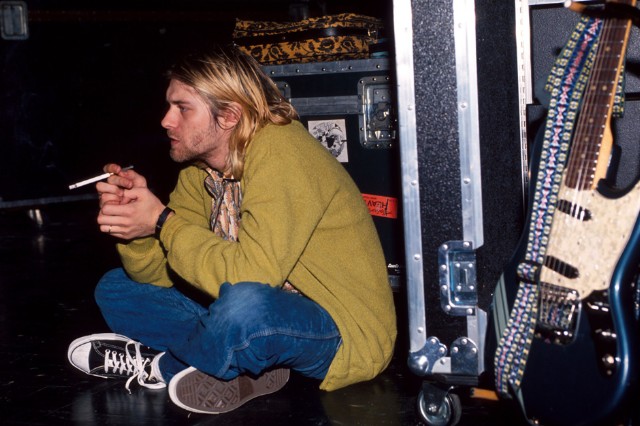 To understand the struggles with mental illness that pervades through Kurt Cobain’s song sheets and lyrics, one also has to understand the childhood and atmosphere that Cobain grew up in. In an interview prior to his death, Cobain describes that as a child he felt like he was an “alien” and his mother “adopted him off of a spaceship” (Kurt Cobain Interview). He continues, adding that at night he “talked to his real parents and family in the sky” and that “there is no special reason for him to be here [on Earth].” Cobain perfectly describes how he exhibited the feelings of depression at an early age and, as we know, uses music as an escape or an outlet to connect with other people. To make matters worse, his parents divorced when he was nine years old and this only heightened his withdrawn, lonely personality and his overall melancholic attitude. Cobain also dealt with instances of domestic violence after witnessing his mother’s partner abuse her.

Many of Nirvana’s songs, written by Cobain, manifested the “demons” of Cobain and attracted droves of fans due to how relatable the music was on a personal level. Some examples of more songs that include the personal troubles of Cobain are “Something in The Way,” “Dumb,” and “Paper Cuts.” Kurt Cobain was not known as depressive or suicidal throughout social media outlets at the time. He was more so labelled a struggling drug addict trying to quit as shown in this 1994 Rolling Stones interview.

In summation, “We no longer just heard the music when we listened to Nirvana; we heard the warning, the signs we had missed, the pain Cobain lived with and had never truly shared with any of us, not really” (The Day Kurt Cobain, And Grunge, Died). As mentioned previously, Cobain conducted an interview regarding his childhood which can be found on Youtube. One of the top comments on the video reads as follows: “I know it’s weird and creepy but I used to think I was an alien, too. And it’s really cool that someone as great as Kurt felt the same way I did. It just.. makes me feel like I’m not entirely alone in this world :)” (Kurt Cobain Interview). This comment perfectly exemplifies the awareness Cobain regarding mental illness through music and helps show the relatability of his music to other “aliens.”

Kurt Cobain’s personal struggles are especially apparent in the Nirvana song “Lithium.” The title of the song is in reference to the medicine lithium which is used to treat and prevent manic episodes of bipolar disorder. He goes against the social norm by having his manic depression in full effect throughout each verse of the song, where one line will display his heightened “mania” side and the next line will show his depressed side. In the first verse this is apparent when Cobain sings “I’m so happy ‘cause today I found my friends / They’re in my head / I’m so ugly that’s okay, ‘cause so are you / We broke our mirrors.” Cobain’s illness is most noticeable in the bridge of the song: “…I loved you, I’m not gonna crack / I killed you, I’m not gonna crack” (Lithium Music Video). The song overall tells a story of a man who turns to religion in order to keep himself from committing suicide. This sent a positive message to Nirvana’s audience while also allowing them to relate to an audience dealing with mental health problems.

Kurt Cobain’s voice and the “sound” of Nirvana were heavily influential to the overall sound of grunge and is the perfect complement to the mental health problems discussed in his lyrics. Cobain’s pained and ragged voice resonates well with the harsh timbre created in the chorus of the song and is the embodiment of grunge vocals that originated from the Pacific Northwest in the 1980s. Cobain’s use of distorted power chords in many songs extending beyond “Lithium” became synonymous with grunge. The heavy distortion in Nirvana’s music is another audible cue of grunge music made possible due to the two amplifiers Cobain connected to his guitar. Cobain and Nirvana’s influence on the grunge genre itself was instrumental due to the fact that they were one of the first grunge bands to get their songs on the radio and gain attention through outlets like MTV. As far as the rest of the song, the drumming style for “Lithium” was also devised by Cobain after being unsatisfied with Chad Channing’s style for the song. This song is perfect for examining the mind of Cobain because of his involvement with many components of the song and for showcasing the sounds and instruments behind grunge.

The music video of the song is in the performance category, yet the video still successfully delivers a message synonymous with the lyrics of the song. The song starts with a riff using an drum beat, a bass guitar, and an electric guitar to form a rock backbeat which puts the listener in a sort of trance while Cobain describes his manic episodes. The riff is played at a lower range than the explosive chorus and bridge which allows for the audience to clearly hear the disturbing lyrics. I believe this was done on purpose to emphasize the lyrics. The repetitive use of the distortion pedal and synth-amplified guitar in addition with Cobain’s “suffering” sounding voice creates an illusion or haze that is quickly snapped out of when the explosive chorus does come on. The distortion pedal became a key instrument in the overall grunge scene due to its ability to allow the artist to switch from quiet to loud very quickly. In addition, the stage presence of Cobain also exhibits the mental health difficulties that he has been challenged with. When he sings a few verses of the song (at the beginning and the 2:48 mark) Cobain is right at the front of the stage yet the camera never gets a clear shot of his face. Cobain has his hair covering the front part of his head while his eyes are also mostly closed (while on camera) throughout the performance. The camera captures the sides of his face and even the frontal shot (2:59 mark) does not show his face very well. This can be interpreted as a technique of avoidance. I personally believe by hiding his face in the music video Cobain alludes to his mental illness and portrays it as more of a focus of the song than himself.

“Kurt Cobain Interview About His Childhood and His Parents.” YouTube, Google, 9 Jan. 2008, www.youtube.com/watch?v=OZKr1BVMPi4.