Over the semester, we explored meaning in music through four main themes—genius, sexuality, disability, and gender. Another recurring theme throughout the class discussion is the dynamics created by the collision between different cultures. Opera Carmen depicts an oriental fascination with the world of Gypsy, especially Gypsy women. Carmen was characterized as exotic, demanding, and sexually arousing, as opposed to the proper, innocent, submissive women held as the Victorian European ideal represented by the character Camilla. As an ancient eastern country, China has long been the subject of orientalism in the western world. However, as the western world observes, interprets, and stereotypes China, China is doing the same things about the western world. This post will analyze the musical elements in a top-rated award-winning Chinese movie named The Flowers of War, with a particular focus on the stereotypical sexuality of female characters and the depicted collision between Chinese and western cultures.

The Flowers of War is a war epic film directed by Zhang Yimou, based on a novel of the same name. The story is set in Nanking, China, during the 1937 Nanking Massacre in the Second Sino-Japanese War. A group of escapees, including a group of schoolgirls, thirteen flamboyant prostitutes, and an American guy named John Miller, who pretend to be a priest, finding sanctuary in a church compound, try to survive the Japanese atrocities1. After an incident when rogue Japanese forces assaulted the church and raped a few school girls, a Japanese Colonel demand those young female students to attend their army’s victory party and entertain them. Fearing to be insulted and raped by Japanese military officials again, schoolgirls decided to commit suicide. To save the lives of these young schoolgirls, the thirteen prostitutes, lead by Yu mo, stand out and are determined to attend the military party on behalf of the schoolgirls. Prostitutes have long been associated with a lack of morals. Therefore the heroic sacrifice of the thirteen prostitutes broke the stereotype of “bad women.” This film uses an unusual expression to fully explain the beauty of human nature that bursts from the depths of the soul when people of different identities in the era of war and hatred. The musical elements in the film run through the fusion and collision of Chinese and Western cultures from beginning to end, producing unexpected screen effects. Combining classical musical instruments with Western stringed instruments, musical elements used in this movie assists the plot to advance to its climax. 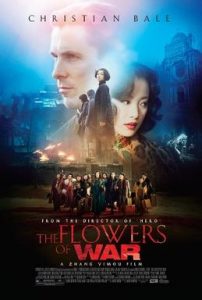 In order to portray the different characteristics of the prostitutes and female students, the film used a clear distinction in their language. In the first half of the film, the director used just a few lines to create the image of the “Qinhuai River Woman,” who is still unscrupulous in the face of national disasters as prostitutes. For example, when Mo first met John, other prostitutes comments that “Westerners with beards are the horniest” and “No wonder Mo is the top girl of the Qin Huai River brothel. Mo, use all of your skills. Seduce that foreigner!” This kind of pornographic saying directly highlights the image of prostitutes being the bad, dangerous, yet sexually arousing women. The most frequently used background music for these prostitutes is a song called Qin Huai River played by an ancient Chinese instrument called pipa. Pipa is associated with feminine, exotic, and romantic style. 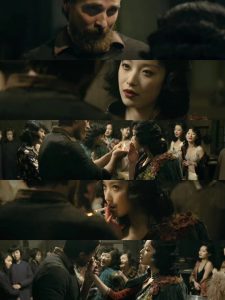 In direct contrast to the “bad women” from Qin Huai River Brothel are the well-educated female students. Compared with the vulgar and charming of prostitutes, female students should be young, pure, and innocent. Therefore, the line for female students showed the cultural literacy of them and at the same time showing their superiority and prejudice as a literate person. For female students, the most frequently used musical element is the church chant. 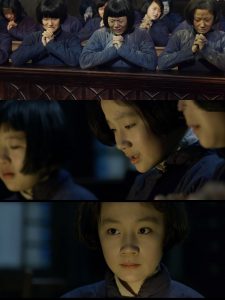 Pipa is the most representative musical instrument of the Chinese national symbol in the film, showing profound Chinese musical characteristics. Pipa is well known for its uniquely clear and melodic sound, and it often expresses a mixed feeling of vulnerability and sadness. The first close-up camera shot of pipa appeared at the beginning of the film: a Qinhuai singer sitting on a galloping carriage with a pipa in her arms and a hook sticking out of the destroyed building beside the road cut off the strings of the pipa by three. At this time, the director enlarged the sound of the broken pipa string. The original noisy background sound in the film disappeared, and the audience could only hear the harsh sound of the broken string. The broken string of pipa represents that the ancient Chinese civilization was crumbling under the aggression of Japanese militarism, and it also forecasts the tragic fate of the Qinhuai River prostitutes. 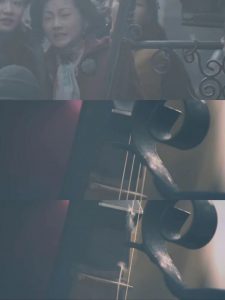 In the film, the Qin Huai prostitute Mo and John Miller fell in love. The film used the violin many times in the background music when Mo and John communicate with each other. The violin has always been called the “Queen of Musical Instruments” in the West. In the film, when Mo and John are together, and when Mo tells John about his tragic and helpless life experience in the dim church, the music in the background is a section of the traditional Chinese song “Qinhuai Jing.” Yet, this time, it is played by the violin. The sad tunes of the violin let the audience learn better about Mo’s tragic origin. This unspeakable life experience whispered from Mo’s mouth, accompanied by the music of violin and pipa, which aroused deep sympathy for Mo from the audience. This film is very compatible with the use of the musical soundtrack and the progress of the plot so that different music can assist in the smooth switching of the story in different times and spaces.

The children’s choirs that appear many times in the film are sung by the Beijing 171 Middle School Jinfan choir. The group is the oldest choir among all high school students choir in Beijing, and its artistic level is among the top ranks in Beijing and even the whole country. The Jinfan choir has always been known for its pure and soft timbre. Their choir music is always full of varied body movements to interpret different types of musical works.

The song sung by the Jinfan Choir in the film is “Angels Sing in the Sky.” This is a song with distinctive Western cultural symbols. It is a Christmas carol sung at Christmas time in Western countries, which depicts the tranquility and peace of Western heaven. The director used a montage of music and pictures in this part of the film. The whole picture presents a dark and cold tone, but a ray of bright sun shines into the church. At this time, the beautiful sound of the children’s choir echoed in the church’s dim lights. Female students had just experienced brutal killing and ravages. Their hearts were filled with anxiety and panic. They formed a circle, praying for the end of the war and expressing their yearning for peace. Accompanied by Christmas carols, their anxiety and fear gradually disappeared. The children’s choir and close-up shots of the innocent eyes of female students led the audience’s attention to focus on those female students. The church music that represents the beauty and the sublime is often used with specific cultural meanings. When the audience hears this chorus of female students, they will have unlimited sympathy and compassion, and condemnation of the abuser.

The “Soul of the Righteous Man,” sung by the well-received Almana Choir, has also appeared in the film many times. A Chinese military officer chose to fight the Japanese army alone to protect the female students. When his life was about to end, he detonated the bomb and died with the Japanese soldiers. At this time, the background music “The Soul of the Righteous Man” fits the plot very well. The meaning of the lyrics of this song is that the souls of the martyrs are in the hands of God, and death does not mean the end for them. The singing of the Almana Choir is full of power, and an atmosphere of reverence, love, and mourning emerges from the choir spontaneously.

In conclusion，music is no longer a simple superposition of melody and music. It is an indispensable key factor in promoting the development of the film’s plot. The entire movie is filled with an artistic atmosphere, and it reveals the collision of a different culture in this specific historical period. This movie is a masterpiece of the combination of Chinese and Western music.