Female representation within the music industry has fallen short of achieving parity for generations. In the 19th century especially, women were discouraged from pursuing professional careers in music. Middle class girls, facing the “requirement” of learning how to play the piano, would often labor over the piano for hours in order to appease her appointed family service.  These young women were expected to play home music only at the request of her father and for friends of the family; personal playing for reasons beyond these purposes would be detrimental to her qualities as a daughter. 1Solie, Ruth A. Music in Other Words: Victorian Conversations. Berkeley: University of California Press, 2004

Although it could be argued that female musicians are not as restrained and prohibited from playing instruments for their own desires, many of these limitations and prejudices against female musicians have carried on today. As we have observed in class readings and discussions, there are double standards for male and female musicians, with male artists often being able to express topics concerning sexuality while female artists are commonly shunned for doing so. Both conscious and unconscious gender discrimination within the music field have increasingly led to deserving female musicians being overlooked for employment and commission opportunities (as well as regionition for their achievements), while male colleagues continue to dominate the industry. According to a recent study by the Annenberg Inclusion Initiative at the University of Southern California, there has been a regression in female representation within the popular music industry over the past decade 2Smith, Stacy L, Katherine Piper, Marc Choueiti, Karla Hernandez, and Kevin Yao. “Inclusion in the Recording Studio?,” March 2021.

The study found that female artists in 2020 represented 20.2 percent of the performing artists of the year top songs, a decline from 22.5 percent in 2019 and even less than the 9-year average of 21.6 percent. 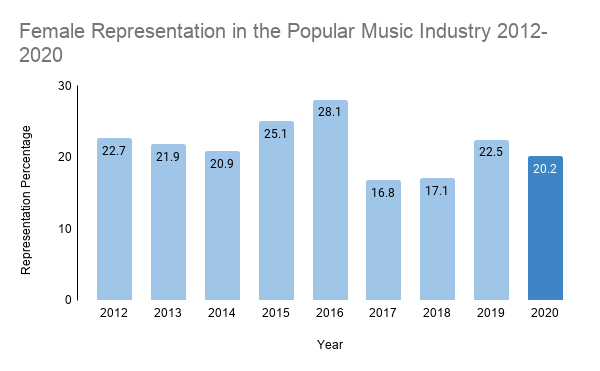 When one considers female representation in the film scoring industry, the disparity appears to be even more jarring. Female composers comprised only 6% of the composers in the top 250 grossing films of 2019, and no female composers were nominated for an Academy Award for Best Original Score in 2019. 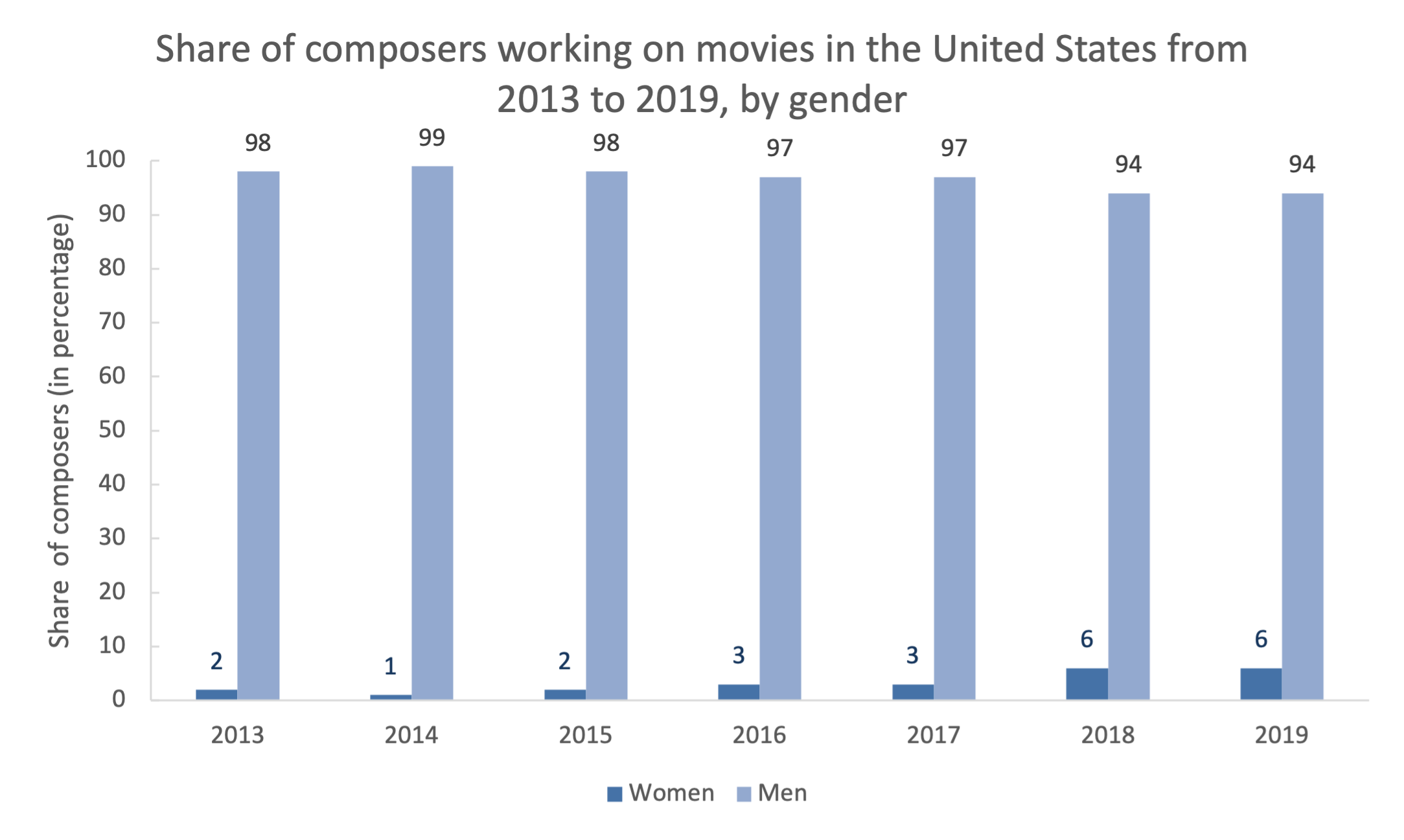 Figure 2: Percentage female representation in film scoring between 2013-2019. Data retrieved from the Center for the Study of Women in Television and Film

The topic of female representation in music (and, in turn, the film industry) is increasingly becoming of interest. With projects such as USC Annenberg’s Inclusion Initiative and documentaries such as David Donnelly’s Forte, gender discrimination within the music industry (and, in turn, film scoring industry) is becoming more exposed to the public. In this blog post, I will discuss select works by female composers Hildur Guðnadóttir and Pinar Toprak as well as address how their expertise has been questioned by others in their field. Though they come from different geographical backgrounds and were classically trained on different instruments, both have experienced the same glass ceiling as they pursued their careers in music performance and composition: musical genius being questioned due to gender. 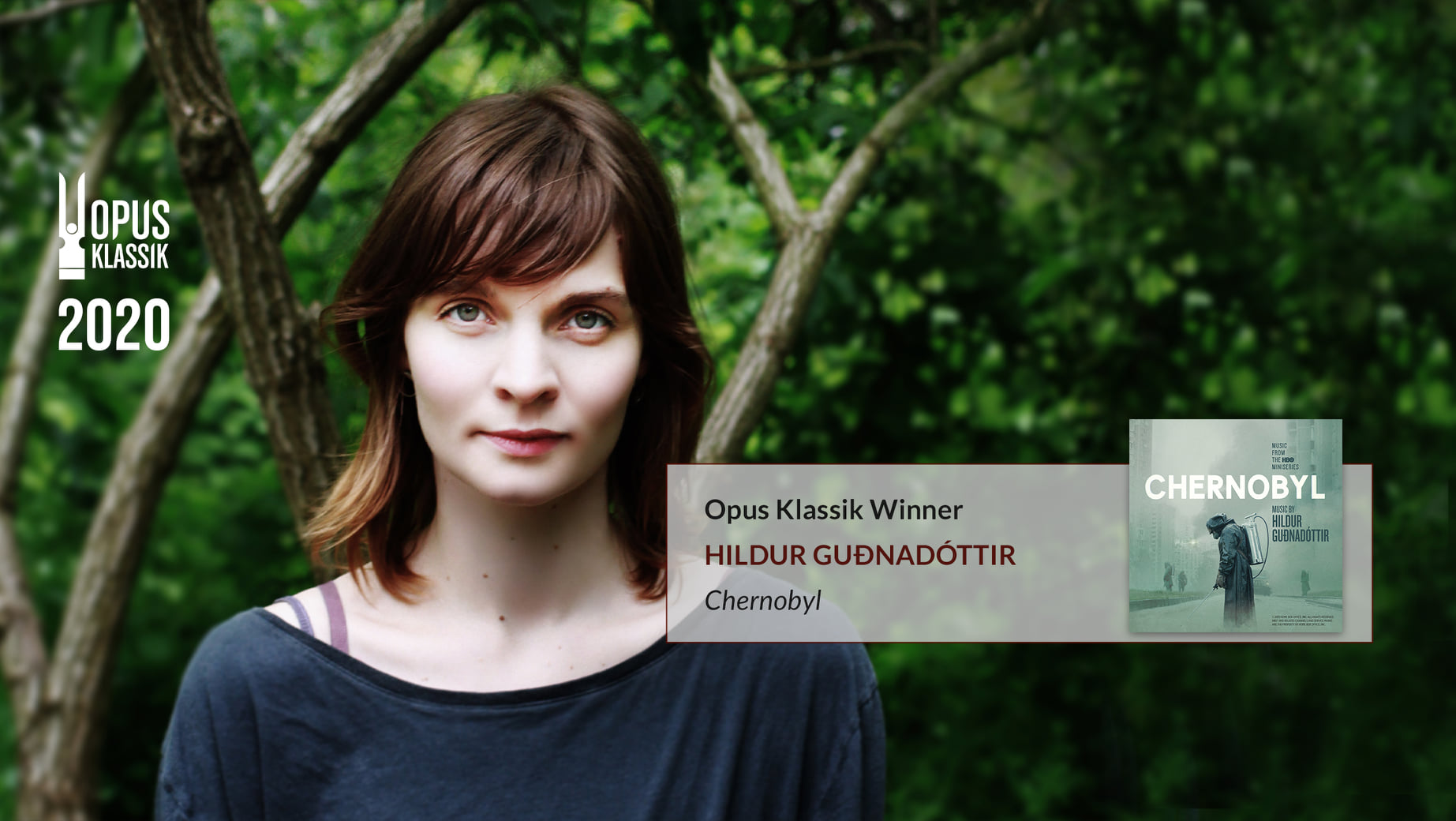 “In the summer season we would hijack buses full of tourists on their way from the airport and take them to this park where they had these caves and I would sing to them and serve them shark.”

Yet, even with her familial background and early exposures to solo performance, Guðnadóttir’s expertise was often overlooked and questioned by others in her field and by the public. In an interview with Epicelff Media, she stated that she would meet people who were skeptical of the abilities of female film scorers, with some often asking “But can she deal with it, can she handle it”. As Guðnadóttir laughs following her reiteration of this sentiment, it is especially made clear that such preconceived notions about a female’s ability to “handle” film scoring are absurd. The revelation that Guðnadóttir still experiences suggestions of incompetency despite her expertise implies the significance gender has on one’s success as a film scorer. While being raised within a wealthy, musical family can be helpful in advancing one’s career, female film scorers often struggle to reap these benefits due to an abundance of gender discrimination in the industry.

For both the 2020 and the 2021 Grammy Awards, Guðnadóttir was the only female composer nominated for Best Score Soundtrack for Visual Media award, and in 2021 she achieved the award over composer John Williams, who currently holds the record for most wins and nominations for the award. 6“Hildur Guðnadóttir.” GRAMMY.com, April 22, 2021.

Through her achievements, Guðnadóttir hopes to eliminate the limits placed on female film scorers and encourage other female film scorers that they, too, can be successful in the industry. In her acceptance speech for her 2020 Academy Award, Guðnadóttir stated: “To the girls, to the women, to the mothers, to the daughters, who hear the music bubbling within, please speak up. We need to hear your voices”7Willman, Chris, and Kate Arthur. “Hildur Guðnadóttir, First Female Oscar Score Winner in 23 Years, Tells Women ‘We Need to Hear Your Voices’.” Variety. Variety, February 9, 2020. https://variety.com/2020/film/awards/hildur-duonadottir-wins-academy-award-oscar-joker-original-score-1203498316/. 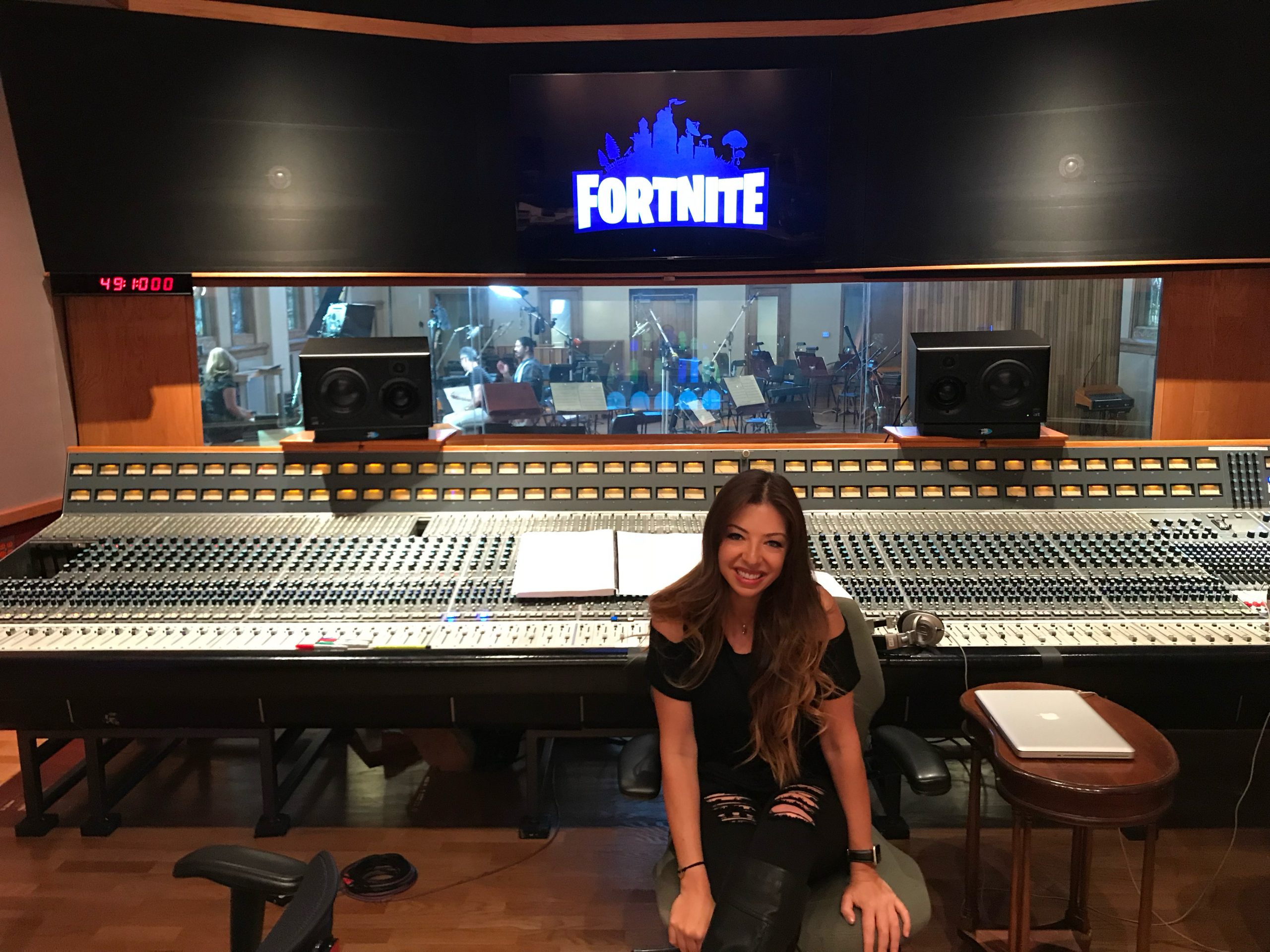 Similarly to Guðnadóttir, Turkish American composer Pinar Toprak has also become a promising pioneer for females in the film score industry. Toprak was born and raised in Istanbul, Turkey. Though her father was an accountant, he had played violin and had performed in stage productions during his earlier years. He had a prominent influence on her interest in music and films 8Fade to Her. “Interview with Pinar Toprak.” September 13, 2020. Particularly, his introduction of American works such as Superman (1978) initiated her fascination with the scores of John Williams and other film scorers featured in superhero films. With the encouragement of her father, Toprak began her classical music education in a local conservatory at the age of five9Toprak, Pinar. “About.” Pinar Toprak, February 26, 2021. https://www.pinartoprak.com/about/. Though she initiated her studies as a violinist, Toprak would soon switch to playing the guitar and ultimately focus on multi-instrumentalism. While Toprak was not born to a family that performed or composed music as their profession, we can see how significant her father’s admiration of the arts was on her fascination with film scoring. Moreover, her enrollment into a conservatory at an early age seems to mirror that of several prominent classical musicians.

Still, her gender would provide an obstacle for Toprak. While a student at Berklee, Toprak would experience negative reactions to her aspiration to compose for films, with her advisors even telling her to “be smart” when she expressed her interests. 10Greiving, Tim. “The Billion-Dollar Composer.” Alta Online, October 29, 2020. At one point, Toprak believed these opinions. After graduating from Berklee College of Music at the age of 19, Toprak would pursue a master’s degree from California State University, Northridge. Through this program, Toprak would receive a recommendation for an internship at Paramount Pictures. The internship would expose Toprak to scoring sessions almost daily, helping her to eventually achieve her goal of working at Hans Zimmer’s music production company. 11Disney Youth Programs. “Disney Youth Programs Blog.” Inspiration from the Pros: Captain Marvel’s Pinar Toprak, March 25, 2019. https://www.disneyyouth.com/blog/inspiration-from-the-pros-captain-marvels-pinar-toprak/.

Toprak’s upbringing and years of education in composition would eventually contribute to her success in being selected for movie projects such as The Lightkeepers (2009) and in video games such as Epic Games’ Fortnite.

Though Toprak has a notable amount of credits, the score that appears to have drawn significant attention to Toprak in recent years has been her film score for Captain Marvel. With this score, Toprak would become the first female to compose for a film in the Marvel Cinematic Universe and the first female to score for a movie that grossed more than 1 billion dollars 12Greiving, Tim. “The Billion-Dollar Composer.” Alta Online, October 29, 2020.

In the Captain Marvel main theme, we are able to hear brass instrumentation that is common in Marvel’s superhero films and other musical elements that point back to Toprak’s classical training. The ornamentation in this theme is also noticeably different from her work in The Lightkeepers.

Being selected to score for a Marvel film had been a goal of Toprak’s for years, as she had previously pitched a demo for Wonder Woman (2017), but was not chosen. As Toprak revealed in an interview at the Captain Marvel premiere in Hollywood: 13Huver, Scott. “First Woman to Score a Marvel Movie Hired a 70-Piece Orchestra to Get the Job.” Vulture. Vulture, March 8, 2019

“I went and hired a 70-piece orchestra and did a big production of it so that they could see me in front of the orchestra conducting, and I did another video inside my studio where I talked about the character and the theme. I really wanted to put my best foot forward, and I’m very grateful it worked out.”

Toprak’s inspiration to provide such an extensive (and expensive) demo shows how dedicated and committed she was to gaining this project. Arguably, though, it is also indicative of the extremes female musicians must undergo in order to prove themselves worthy of receiving the same recognition that their male counterparts would receive ordinarily. Still, as we can observe through Toprak’s journey and accomplishments, modern female composers are increasingly resisting the stigma placed against them. Most importantly, as we learn from the works of both Toprak and Guðnadóttir, women are not limited to only composing “light” and “soft” compositions. Female composers are just as capable of having as much versatility in musical theme and style as their male colleagues.

All in all, while there has been advancement in the music professions that female musicians can pursue, female film scorers (and musicians in general) continue to have to fight for proper recognition and respect from others in their field and from the general public. As highlighted by director Beryl Richards: 14Ellis-Peterson, Hannah. “Gender Bias in the Film Industry: 75% of Blockbuster Crews Are Male.” The Guardian. Guardian News and Media, July 22, 2014

“On so many sets women are seen as lesser beings in terms of status and many women still find it hard to be taken seriously….There are still a lot of hostile working environments in film and television for women to walk into that need to be addressed, where they are treated differently from the men, but because of the nature of the industry none of these people get called out”.

Thus, it is important that discussions concerning gender representation within the film scoring industry continue to be emphasized. Doing so would likely help to expose and reduce biases towards female composers and amount toward equitable pay amongst film scorers. Additionally, an important measure that was not addressed in this paper was the additional discrimination women of color face within the industry. As revealed through the Inclusion Initiative’s 2021 report 15Smith, Stacy L, Katherine Piper, Marc Choueiti, Karla Hernandez, and Kevin Yao. “Inclusion in the Recording Studio?,” March 2021, women of color are far less likely than their white female colleagues to work in careers such as film directing, film production, and in executive positions. Many of these women indicated that both their gender and their race negatively impacted the amount of career opportunities they had. Therefore, as women of color are especially less likely to gain opportunities in film scoring, it is important that racial disparities are also considered as steps are made to achieve equity within the industry.