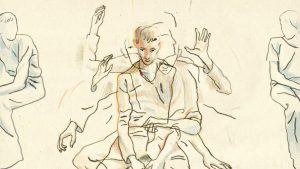 Music has been used as therapy for a wide variety of disorders since as early as 1789; from anxiety to autism to Alzheimer’s, music has proven cognitive benefits that can boost mood, improve memory, and reduce pain and suffering in patients.3“History of Music Therapy.” n.d. American Music Therapy Association. https://www.musictherapy.org/about/history/. Miraculously, this also applies to Tourette Syndrome. One German study on the topic showed that out of “performance of music, listening to music, and mental imagery of music,” “musical performance, where the effect was sustained for 15 minutes after the performance ended” had the largest affect on participants 4Devlin, K., Alshaikh, J.T. & Pantelyat, A. Music Therapy and Music-Based Interventions for Movement Disorders. Curr Neurol Neurosci Rep 19, 83 (2019). https://doi-org.newman.richmond.edu/10.1007/s11910-019-1005-0. While still not a cure, the undeniable benefits were a breakthrough for sufferers.

Considering the unique benefits of music to people with TS, it seems like there should be a disproportionate amount of people with Tourette’s that make music their profession. There are, in fact a few famous musicians who have TS, allegedly including people as famous as Kurt Cobain and Mozart according to some scholars.5Carmago, Carlos Henrique F., and Augusto Bronzini. 2015. “Tourette’s syndrome in famous musicians.” Arquivos de Neuro-Psiquiatria 73, no. 12 (October): 1038-1040. https://doi.org/10.1590/0004-282X20150148. 6Bhattacharyya, Kalyan B., and Saurabh Rai. 2015. “Famous people with Tourette’s syndrome: Dr. Samuel Johnson (yes) & Wolfgang Amadeus Mozart (may be): Victims of Tourette’s syndrome?” Annals of Indian Academy of Neurology 18, no. 2 (April-June): 157-161. doi:10.4103/0972-2327.145288. But these are people in whom scholars have sought Tourette’s; in reality, there is actually a very little evidence that these figures actually suffered from Tourette’s. For Mozart, the driving argument is his scatological humor, actually quite common for the time and not directly tied to Tourette’s; in fact, citing this is more reminiscent of the way people with the condition are poorly portrayed in film. Other aspects of the argument include restlessness, which is probably more accurately attributed to his much more strongly argued ADHD and OCD. And for Cobain, the narrative gets even hazier. While Nirvana did have a song called “Tourette’s,” and Cobain did exhibit traits like teeth grinding, Cobain’s drug use and general quirkiness are more logical conclusions than TS. The motives for posthumously, halfheartedly diagnosing celebrated musicians are inscrutable; an honest attempt at academic study? Finding a point of inspiration for other sufferers of Tourette’s? Or simple fame for the author for what would be a groundbreaking discovery? It’s hard to say.

The most prominent contemporary and, more importantly, confirmed example is definitely Billie Eilish. The 18-year old rose to popularity with the aid of the songwriting talents of her elder brother just three years ago, and she’s been in the spotlight ever since.

In 2018, she was forced to address her condition publicly (see image below) after fans began compiling videos of her ticing. Her tics are subtle enough (mostly eye and facial tics) that people actually thought they were her intentional attempts at humor. Video compilations were uploaded without her consent, nearly all of which come across as wildly invasive, perverse, and disrespectful once their full context is understood. But her admission did little slow people’s intrigue. “Billie Eilish Ellen Show Full Interview (HD) billie has tourette!? 😱(WTF)” read one YouTube video title. “DOES BILLIE EILISH HAVE TOURETTES?” read another video, which racked up a staggering 326,000 views. Would viewers have tolerated compilations and clickbait titles like this of a celebrity with anxiety being recorded having a panic attack? Certainly not. And the situation is made worse by her age: just 16 at the time. But the combination of her superstar status and the unfamiliarity of her condition led to dozens of these compilations being posted without regard to her feelings or privacy. “I would love to get this straight so everyone can stop acting goofy,” Eilish said in a post to her Instagram story. “I have diagnosed Tourette’s. I’ve never mentioned it on the internet before because nobody thinks I’m [serious].”

Fans backing her into a corner to the point where the only way out was to reveal her condition is unfair. Her tone indicates that she took it lightly despite the gravity of the situation, but not everyone is likely to respond in the same way. This is a reflection of the larger issue of granting celebrities more privacy, but also the lack of understanding around disability and TS in particular.

Author Stephanie Jensen analyzed the intersections of music and disability in the life and scores of ‘Blind’ Tom Wiggins, a blind and suspected autistic black pianist and composer exploited by his enslaved family’s master.  Her argument that “an understanding of … disability is … intimately linked to a deeper analysis of [a musician’s] works” is particularly apt in this instance, as well.7Jensen-Moulton, Stephanie. 2006. “Finding Autism in the Compositions of a 19th-Century Prodigy: Reconsidering “Blind Tom” Wiggins.” In Sounding Off: Theorizing Disability in Music, 201. New York: Routledge. https://search-ebscohost-com.newman.richmond.edu/login.aspx?direct=true&db=nlebk&AN=176047&site=ehost-live. Music aids more than just celebrities, of course, but it takes some mental re-framing to think about the work of musicians with Tourette’s syndrome in the context of their disability, and it takes some digging to find public displays of people with tics using music. Luckily, artist Jamie Grace uploaded a video of her experience as a music producer with Tourette’s syndrome to give insight into the way rhythms and sounds are actually harvested from her own motor tics. In the video, Jamie Grace, a singer-songwriter and producer, decides to record herself ticing in order to compose a song reflecting her struggle with the disorder, and takes us through the process of producing the song.

Jamie shows us how she took percussive results of some of her tics and turns them into a beat, and how her vocalizations turn into background vocals. It’s quite beautiful to see how Jamie harnesses her sometimes-painful disability to produce something beautiful and inspiring. Jamie also says in the video that she relates a lot to Billie Eilish and her work as a musician who also has TS. By looking at this literal use of tics in producing music, one can begin to think how Tourette’s might also be reflected more subtly in Billie Eilish’s music.

Of course, there’s no way to know without asking Billie if it was intentional, but it seems to me that a lot of the tic sounds that Jamie used in her song are mirrored in Billie’s works. In thinking about Billie’s music, and how it could be analyzed in the context of her Tourette’s syndrome the first thing that came to mind was the vocalizations in her songs. Her song Bad Guy, which topped the charts and stayed on the radio for months, features a famous little ‘duh.’ This seemingly insignificant inclusion is reminiscent of more guttural, throaty vocal tics, and is just one example of including her voice in a medium other than singing. There’s also laughter in ‘All the Good Girls Go to Hell,’ and a shout in ‘my boy,’ which aren’t terribly common or conventional inclusions in modern pop music, but are all actually common tics. Eilish also includes lots of repetitive knocking, snapping, and clapping percussive sounds, which, in light of Jamie’s video, take on a meaning different than for other musicians without Tourette’s syndrome. Below is a compilation of clips from some of her songs that contain handmade percussive sounds and/or vocalizations.

Disability on the whole is a widely misunderstood topic, resulting in a hesitation to reveal diagnoses to the general public. There may be many more people, and many more musicians, with conditions like Tourette’s Syndrome than we realize. The next time a Billie Eilish song comes on the radio, pause to listen for unusual percussive sounds, for interjections, for elements a bit outside the musical normal. You’re sure to hear them, and you’re sure to hear her; despite her age and her condition, she is one of the most popular contemporary pop artists. And while it is important to recognize that people with Tourette’s and other disabilities can break through in the music industry, it’s also important to make sure that we don’t make them and their career out to be a trope-y disability narrative, or to mistake their disability for their personality. Billie is a great musician in her own right, and has said in interviews that she doesn’t want to be ‘Billie Eilish, the Artist With Tourette’s,’ which we must fully respect.