Once upon a time, not so long ago, around the year 1930, a man by the name of Walt Disney decided to create Disney princesses. From Cinderella, Snow White, Aurora and Ariel, all of whom have been adored since they were first introduced to the world. They are all seen as “affectionate, helpful, tentative and domesticated”11 -https://sites.middlebury.edu/disneyprincesses/identity-construction-of-female/.As beloved as they were, there are many issues with the stories they tell. To give some background, when the first Disney princess movies were released, society saw women as nothing more than housewives. The all male staff who wrote these movies believed men to be more capable and superior to women which meant a prince was needed in the movies for the princesses to look to for support, to save the day and rescue them from their troubles. The portrayal of these characters reflects “the societal conventions of males as strong, adept figures, and females as demure and weak.”22 – https://sites.middlebury.edu/disneyprincesses/identity-construction-of-males/. Although the original Disney princess movies are still watched and adored by many, the message they send to young girls is that they are incapable of being independent, strong, and brave; they need a man to protect them and only a man can make their life complete. Well, I am pleased to say that that is no longer the case.

Fast forward to the year 2016. A year where a new Disney princess is born. A princess who does not need a man and one who will show young girls how strong they can be. Meet Moana. 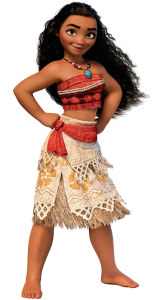 Moana is about a teenage girl, in particular, a Polynesian princess who is next in line to lead her island. Her people are people of the land, not the sea but Moana is continuously drawn to the water. From the very beginning it is clear that she is going to defy the orders and ways of her people because she is destined for more. Ultimately, Moana ventures out pass the reef, into the ocean to restore the heart of Tafiti and safe her people.

It is not only the plot and character that defy gender roles, but the music chosen for Moana does as well. Let’s take a journey through the movies and the songs as they progress with Moana and her self-identification as a strong, independent girl.

As I mentioned previously, Moana has always been drawn to the sea but her people are forbidden.  From one of the very first scenes, you are able to see that Moana is going to be a challenge. In this scene, the melody of the music playing as little Moana walks to the water is soft and mellow, fitting for a Disney Princess. With the beautiful voice of a woman singing in the native tongue and soft woodwinds in the background, it draws you in and gives you a feeling of intrigue. Watching the little, chubby faced, big eyed Moana walk toward her destiny with this playing in the background depicts a sense of untouched empowerment.

Moana’s self-identification journey begin from the start of the movie and it is clear she is defying the stereotypical damsel in distress Disney princess role. But, her father, the current chief, is doing everything he can to make sure she follows the rules and does as she is told. This next song tells two stories: One of her father and the village people and one of Moana and her struggle to accept her role on the island. To start, it is an upbeat tempo song with woodwinds and percussions playing in the background as Moana’s father and mother explain to her everything she needs, and everything her people need are right here on the island. The upbeat, catchy tune of the song tells the story that Moana is happy with her life. She has accepted her role just as a good, weak princess would; when truthfully her father is the one forcing it upon her. This dynamic, although not exactly like the original Disney princess prince/princess duo still demonstrates that there is nothing more to life for young girls besides what they are told they have. Even within the lyrics that the father and mother are signing they say “You must find happiness right where you are”33 – https://youtu.be/RTWhvp_OD6s which demonstrates a restriction of exploration and adventure, exactly the life an original Disney princess had.

As the song goes on, Moana escapes the island ceremony for her to become chief and ventures to the water where her grandmother is dancing with the waves. Now, although it is still the same melody, the tempo of the song has slowed and the instruments have softened. Quiet percussions are heard in the background as Moana and her grandmother dance by the sea. Within seconds, Moana has grown into a young woman and the music has changed. Now, a new tune is playing with a sound of longing for more. Again soft percussions are heard as her grandmother tells her “You are your father’s daughter, stubbornness and pride. Mind what he says but remember, you may hear a voice inside. And if the voice starts to whisper to follow the farthest star, Moana, the voice inside is who you are.”44 – https://youtu.be/RTWhvp_OD6s. As this line ends, her grandmother moves the bushes to reveal to her the sea. With the music change and the lyrics that are sung, it connects to the first scene of Moana at the water. Feeling of intrigue and curiosity about her true destiny are felt. But Moana refuses to embrace her destiny and returns to the main land, and with this return so is the return of the upbeat tempo of the song. This shows that she is embracing the message of finding happiness right where you are and making herself conform to the orders of her father.

It may seem, at this point, that Moana has decided her fate and decided to obey orders, but what kind of empowering Disney Princess movie would this be if that was the case? As I’ve said, Moana is no damsel in distress, she “is an independent young girl who doesn’t need a man to create her “Happily Ever After” in any way shape or form!”55 – https://medium.com/@eng122.059/is-disney-creating-stereotype-breaking-princesses-moana-definitely-is-357bf2f69ef7.. Eventually, Moana realizes what she needs to do and decides to venture across the sea to follow her destiny which is to restore the heart of Tafiti and save her people. In this journey, she finds herself accompanied by a Demi God named Maui who just so happens to be the one who stole the heart in the first place. I know, I know, you’re probably thinking, “A big strong, Demi God is now there to save and protect Moana”, but you would be wrong. To prove to you that he is not the typical prince character, I’d like to show you the fight scene I refer to as “Moana’s bada** Wonder Woman moment” because it is just like when Wonder Woman walks across no man’s land solo and strong. In this amazing scene, Moana and Maui are forced to fight the oh so dangerous coconuts known as the Kakamora. As Moana is ready to fight, Maui is ready to escape. He tells Moana that she will never get the heart back and as she jumps onto their ship he tells her that they are just going to kill her. Now, does that sound like the brave, heroic prince coming to safe the day? I don’t think so. Instead, it is Moana who comes in hot and fights off the Kakamora. As she begins her fight, the music has triumphant woodwinds and loud war drums playing. And the best part is when Moana comes soaring down from the Kakomara ship back to Maui on the spear she threw that stuck onto their sail, with the chicken and the heart in her mouth. Talk about bada** and defying all of the stereotypes Disney has placed on girls.

This is a defining moment in Moana’s self identification journey because she begins to realize who she is and what she is capable of. The next moment that shows how brave, strong and capable she is is when she walks straight toward the fiery monster, Te Ka, because she knows they are not the monster they are portraying themselves to be; they are Tafiti and she wants her heart back. The sea parts way for Moana and as she walks towards Te Ka strong and confident, while dramatic, emotional percussions play behind the beautiful woman singing the native tongue just like when the sea opened for her in the first scene and showed her the heart. With this melody playing behind her, a feeling of accomplishment, of proudness and of hope comes across as you see Moana achieve her destiny, achieve her journey of self-identification and become an independent, brave young woman. And as the fiery Te Ka storms towards her, she stands tall and strong and a soft violin is heard as Moana sings “But this does not define you. This is not you are. You know who you are.”66 – https://youtu.be/sf3CevfP-E8. Although the music is soft and quiet like you would expect for a Disney princess, the moment is powerful. It is powerful because it shows she knows who she is and she has no doubts. This moment shows that this is “a Disney princess movie in which there are no princes hanging around, no boys to really think about at all, no girly hang-ups or thingamabobs to fritter over, and no romantic subplots to distract from what’s truly important: survival, independence, identity, self-belief.”77 – https://medium.com/@eng122.059/is-disney-creating-stereotype-breaking-princesses-moana-definitely-is-357bf2f69ef7 .

Moana has overcome every odd against her and has embraced her independence. In her song “I Am Moana”, she does exactly this. A triumphant tune accompanied by drums and soaring percussions and woodwinds emphasizes the strength of who she has become. She now knows her place and knows that she will lead her people well. No other Disney princess has ever journeyed across seas, fought solo against enemies, or have become the chief of their people. Moana is an example to all young girls that they never need a man to give them power, confidence, and a full life; all of this can be achieved on their own.

Moana, thank you for showing young girls all over the world that they do not need a prince charming to protect them and carry them off to safety. Thank you for showing them that they can achieve greatness and showing them to never back down from a challenge. Thank you got giving us a soundtrack of empowerment and one that never fails to uplift spirits. Moana, you are an inspiration and role model.  As you said, “You know who you are” and we sure do; we are bada** just like you.