Tennessee pioneer Joseph Brown is the only author in this collection who writes about the jerking exercise from personal experience. In this excerpt from his “Biographical Sketch” (1860), the pious Cumberland Presbyterian clergyman described the impact of the Great Revival near his home in Nashville. It was a “powerfull time,” Brown noted, with “Som a Crying for mercey and Others a shouting and Maney Jirking.” Brown defended the authenticity of the bodily exercises against certain “Wicked” revival opposers who scoffed at the convulsions as the “works of the devil.” Several days later, as he traveled alone and on horseback through Cherokee lands to attend a treaty session at the Tellico Blockhouse, Brown was “taken with the Jirks.” Recalling these events toward the end of his life, Brown acknowledged that he had experienced occasional episodes of the jerks for more than five decades. Dating Brown’s account is difficult. He claimed the first jerking incident occurred in 1803, and yet the second Treaty of Tellico was not signed until October 24, 1804. A former captive among the Cherokees, Brown may have been traveling to Tellico to serve as an interpreter during the early negotiations in 1803 that led to the creation of the Georgia Road. For later accounts of Brown’s jerking fits, click here. Conjectural readings and textual defects appear in square brackets.

But I will Now go back to 1803 When I lived in the Neighbourhood of Nashville. I Was a gowing to town One Morning and One [of] My Near Nabours Requested me to [see] his Brother in law on some buisnes. I went to his house and was informed that he was sick. I Went up stairs to see him and hearing some person a Coming up turnd his [head] to See Who it was and When he Seen it was me he began to Cry and said he was almost gon and desierd Me to pray for him. I had a hymn book in My pocket. I turned to a hymn sutabel for a parson under afliction and Commensed singing and before I was don singing My hymn the Room Was Crowded. I fell upon my knees and had a good deal of liberty in prayer and gust [just] as I Closed my prayer Couzen Rees Porter Came up and he gave a powerfull Exhortation and then prayed and he was powerfull in prayer. The man got well and two or three weakes after that thare was a two days Meeting appointed at Zion Meeting house on Whites Creek five Mile from Nashvill but only two Miles from My house and it was a powerfull time among the peopel for two hours Som a Crying for mercey and Others a shouting and Maney Jirking and ther was a number thare from a [Gresey] that was up on the Creek three or four Mi[l]es of[f] Vearey [many] of Whom Ware Vearey Wicked and as [it] Continued to late in the Eavening and the[y] give out for Night Meeting I started out to git My horses for My Self and Wife to gow hom and Come back for Night Meeting and as I passed out of the house thare was a Croud of thoes wicked young Men a standing before the door a talking about the Jirks. One of them Say it is the works of the devil or Brown would have it. I was vearey much Motifyed to think that I Should be Set up to Judg Christians by and in a few days I Started to attend a treatey at Telico Blockhouse in East Tennesee and thare was still a Wilderness to gow threw and it was Vearey Much impressed on My Mind the duty of fasting as all travellers had to Carrey something for themselves and their horses. I had Rode to after the turn of the day and had not broke my fast and Was then on Cumberland Mounten. I Rode som distance from the Rode and got down and give my horse Some of the Corn he had been Carreying on his back and then I treyed to pray before I brok My fast and While I was a praying I was taken with the Jirks and the impresson was followed with power. It was to Stop the Mouth of the gain sayer and I Cried Lord if it will Stop the Mouth of one gain sayer thy will be done and the Vearey Moment I Submitted I felt More Comfort than I had Ever felt before and from [that day] to now it has been a blesing to me for it takes from me an[y]thing of a Man pleasing Sperett or a Man fearing Sperett that I gust want to sink into the will of god for it is the Same power that made the Gard that Came [to] take the dear Saver When he Enquired whome Seek ye? They said Jesus of Nazarus and he answerd I am he. The[y] Went backward and fell to the ground [John 18:4–6]. And [I] honestly beleave it Will Mak all those that will be humbel more humbel and Sink into the will of god for I have bin als[o] su[b]ject for 57 years. 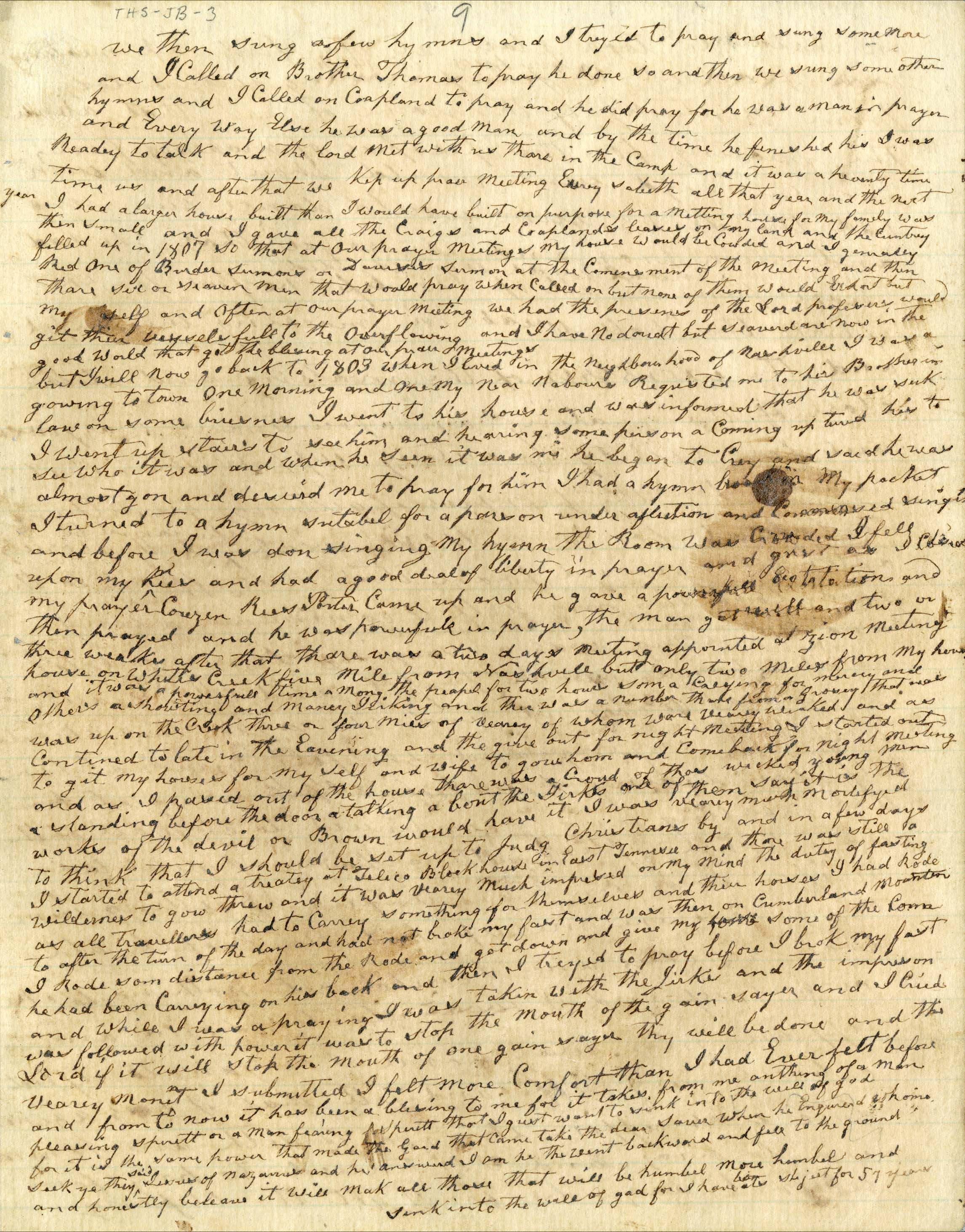