Capillary Power: The capacity of power to circulate throughout a society. It can take the following forms: physical violence used or threats; economic sanctions and coercion; meanings of persuasion. It is applied routinely in the social order, and it reorganized or redistributed through state authorities, who uses power as an instrument of coercion. Power is the major source of social discipline and conformity. The systems of power in prisons especially, no longer required force or violence, as people learned to discipline themselves and behave in expected ways.

Panopticon: “Instead of using violent methods, such as torture, and placing prisoners in dungeons that were used for centuries in monarchial states around the world, the progressive modern democratic state needed a different sort of system to regulate its citizens. The Panopticon offered a powerful and sophisticated internalized coercion, which was achieved through the constant observation of prisoners, each separated from the other, allowing no interaction, no communication. This modern structure would allow guards to continually see inside each cell from their vantage point in a high central tower, unseen by the prisoners. Constant observation acted as a control mechanism; a consciousness of constant surveillance is internalized.” from http://www.moyak.com/papers/michel-foucault-power.html 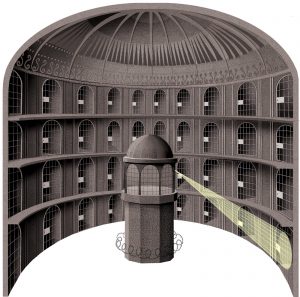 2 Responses to "Class for November 12"