translation and commentary by Lillie Izo (’19)

A POEM IN THANKSGIVING TO EMPEROR AUGUSTUS GERMANICUS DOMITIANUS
He praises the royal banquets of Sidonian Elissa,
he who carried great Aeneas into the Laurentine fields;
and he showcases the meals of Alcinous with enduring song,
he who wore out Ulysses, led back by means of much sea travel:
[5] But I, to whom Caesar for the first time gave the new delights of sacred dinner
and permission to rise up to the imperial table,
with what lyre may I celebrate my granted wishes, how
may I sufficiently loosen gratitude? I would not speak
worthily, if both Smyrna and Mantua should each tie
[10] fragrant laurel leaves on the happy crown of my head. I seem to recline
in the middle of stars with Jupiter, and to take immortal wine
extended by a Trojan right hand. We have crossed over barren years:
This is the first day of all time for me, here are the thresholds of life.
As I lie down, do I see you clearly, ruler of lands and great parent
[15] of a conquered world, you, hope of humankind, you, concern of the gods?
Is this nearly granted, is it granted to gaze upon your face
amidst wine and tables, rather isn’t it divine law to rise up?
The august roof, huge, not outstanding with a hundred columns,
but with as many columns that can hold up the high ones and the sky
[20] with Atlas sent away. The neighboring palace of The Thunderer
is astonished at this, and gods rejoice that you are placed
on an equal seat. You should not hasten to exceed the great sky:
So great a massive structure stretches out, the attack of the sprawling hall
stretches out freer than a field, embracing much
[25] of a covered ether, and less than only its master; Domitian himself fills up
the household gods and supports them with remarkable spirit. In there
the Libyan and Trojan mountains shine in rivalry, both dark Syene
and Chian stone and rocks competing even against the bluish-grays of Doris;
and Luna marble sufficient only for carrying columns.
[30] High above is the ceiling’s appearance: you would scarcely glimpse the top with your weary eyes and would think it to be the panelled ceiling of gilded heaven.
Here, when Caesar ordered the nobles of Romulus and a thousand trabea-wearing men arranged in an army of columns to recline together at the tables,
Ceres herself, with the fold in her robe well girded, and Bacchus work to provide. [35] Thus the favorable byway of aetherial Triptolemos flowed,
Thus under a vine-bearing bough Lyaeus shaded bare hills and sober farmlands.

But my desire does not have time for the banquets and the Moorish oaks
resting on ivory columns and the servile squadrons according to rank,
[40] rather for him, the time to see the man himself, calm in countenance,
but soothing the rays of my sight with his serene majesty and modestly lowering standards of his own fortune; nevertheless a concealed esteem shone in his face. A man such like him that, when seen, even a barbarian foreigner and any
[45] strange nation may be able to recognize him.

(Title) Eucharisticon ad Imperatorem Augustum Germanicum Domitianum, “The Poem of Thanksgiving to Emperor Augustus Germanicus Domitian”: With this poem being in dactylic hexameter, a meter popularly shared in heroic (epic) narratives, and by using a derivative of the Greek word eucharistikos logos, which could be translated as ‘reason for, or words in thanksgiving,’ instead of its Latin equivalent gratiarum actio, ‘act of thanks,’ Statius alludes to a heightened, epic-style quality within his own work (Coleman 1988: 82).

(1) “the royal banquets of Sidonian Elissa” (Regia Sidoniae convivia…Elissae) refer to the hospitality Queen Dido of Carthage provides to Aeneas and the Trojans.  It is interesting to note this particular epithet which expresses an interesting juxtaposition between Dido’s past Sidonian/Phoenician identity and the Roman life she desired to share with Aeneas (Anderson 1994: 133).  Perhaps Statius applied this adjacency to his poem to evoke a similar identity crisis of sorts: he being a Roman poet aspiring to the esteem of both the Greek and follow Roman epicists he mentions in the following lines.

(2) “who carried great Aeneas into the Laurentine fields” (qui…Aenean Laurentibus intulit arvis) refers to the Augustan poet, Virgil, author of the Aeneid.  After escaping Troy, Aeneas and this men settled in the area of Laurentum, about 16 miles outside of Rome (Bunbury 1857: 146-148).

(3-4) “he showcases the meals of Alcinous with enduring song, he who wore out Ulysses” (monstrat…qui…consumpsit Ulixem) refers to the banquets King Alcinous of the Phaeacians and father of Nausicaa hosts for Ulysses/Odysseus in books 7 and 8 of Homer’s Odyssey, as well as his overall seafaring journey back home. [Click here for summary]

(6-7) “to rise up” (consurgere): The significance of rising up at a table is that the ancient Romans reclined on their left elbows in a U-shaped formation on a triclinium [image], thus the meaning most likely can be taken metaphorically; rather, the narrator Statius could be gifted with an opportunity to attain a spot at the imperial table, and not literally stand up whilst dining.

(8-9) “[I would] not…, if Smyrna and Mantua [should]” (non, si…Smyrna et Mantua) has a performative air that highlights a more humble Statius in his coy back and forth of associating his work with that of the great epicists.  Mantua is historically renowned for being the birthplace of Virgil in 70 BCE (Parrott-Sheffer).  Smyrna, now present-day Izmir, Turkey, is the city in which Homer was born, reportedly by its stream of Meles (Pletcher).

(11) “Jupiter and…the Trojan right hand” (Iove et Iliaca…dextra): For the narrator Statius to be a guest of Domitian’s dinner party and to recline in the middle of stars with Jupiter, it may be implied that Domitian is an understudy of Jupiter, even retaining divine status with the Olympian cupbearer, Ganymede, at his beck and call (Coleman 1988: 87).

(12) “we crossed over barren years” (steriles transmisimus annos) reveals an ambiguous status of Statius and Domitian’s relationship.  Scholars have suggested that the barren or sterile years may refer to either a period of time that Statius fell out of Domitian’s favor, or a rebirth of their artist-patron relationship after his poem on the German Wars won the Alban contest in 90 CE (Newlands 2002: 280; Coleman 1988: 87).  However it is also noted that in following lines outside of this passage (Statius, 4.2.57-67), Statius digs up old feelings of neglect by the emperor in coming years, despite the fresh rekindling of friendship with praise following the contest victory (Newlands 2002: 280-81). Perhaps this detail of their relationship may offer insight into how poem 4.2 could be read with either a genuine overtone or satirical undertone.

(14-16) “do I, lying down, discern you” (tene ego…cerno iacens): The repeated second person address to Domitian, naming him both in rank with Jupiter and also in opposition, whereas Domitian is the ruler on earth though with immortal status gives off the same sentiments of heightened language found in hymns (Coleman 1988: 87-88). The latter half of this line is significant foreshadowing the gaze of the narrator Statius and how he implements that gaze in not only a meta-literary context but also in the context of the scene itself.  By mentioning that he is reclining while looking at Domitian (who is also reclining), it can be inferred that Statius is then putting himself on equal terms with the emperor, or at least in an equal position to him both physically and literally, while praising his divine characteristics. This ironic placement may serve as more evidence to ambivalize the true nature of their relationship.

(16-17) “is this nearly granted, is it granted to gaze upon your face…rather isn’t it divine law to rise up?” (datur…datur ora tueri…et non assurgere fas est):  The use of anaphora (repetition) likens this rhetorical interrogative to the utterance of disbelief by Anchises upon seeing Aeneas in the underworld (Coleman 1988: 88).  The narrator Statius hereby also takes on an air of incredulity, which also may be understood as additional subtle sneering at the emperor.

(19) “with Atlas sent away” (Atlante remisso): This namedrop has an element of hyperbolic humor attached to the description of just how many columns line the palace as it suggests that Atlas, the Titan held responsible for supporting the world upon his back [image], would even dare to take a day off from this monumental, divine job (Coleman 1988: 89).  Furthermore, the palace of Domitian is likened to divine structure.

(20) “The Thunderer” (Tonantis), a.k.a. Jupiter: It is interesting to observe that Jupiter is not listed here by one of his proper names, rather by an epithet. Considering the context, perhaps this hyperbole, suggesting that the exterior of Domitian’s palace atop the Palatine Hill in Rome may even surpass the divine decoration of the exterior of the temple of Jupiter Optimus Maximus, atop the neighboring Capitoline Hill [image of Capitoline Museum’s speculative model – 509 BCE] highlights a locative comparison, in both the divine and mortal realms (Coleman 1988: 89-90).

(21) “gods rejoice that you are placed on an equal seat” (pari…sede locatum [esse] numina): This continuation of the hyperbolic ekphrasis appears even more ridiculous as it is confirmed that not only does the palace have divine grandeur, but also that the divinities are even happy about this mortal emperor’s architectural accomplishments.  Thus making “Statius’s ostensibly panegyrical praise of Domitian’s hospitality” a more convincing interpretation (Malamud 2007: 244).

(25) “he himself fills up the household” (ille penates implet): Penates may also serve substantively and refer to the gods of the household [image]. However considering the context in which it is used, where penates is merely the household, Domitian could again be divinized.

(27) “the Libyan mountain shines and the Trojan mountain shines” (mons Libys Iliacusque nitet): The shininess of these marbles rivals the shine of the following stone materials that furnish and decorate Domitian’s palace.

(27) “both dark Syene” (simul atra Syene, alternate reading of % [lacuna] multa Syene): This refers to a deep rose-colored granite from Syene, present-day Aswan, Egypt (Coleman 1988: 91) [map]. There is a corruption in the transcription of the text in this line. The alternate reading followed here removes asyndeton (lack of conjunctions).

(28) “Chian stone and competing rocks” (Chios… saxa) refers to marble quarried from Chios, an Aegean island known for its wine (Coleman 1988: 92). The other rocks compete against the personification of the ocean’s daughter, Doris, for the most beautiful hue of blue-green.

(32) “a thousand trabea-wearing men”:  The trabea was a toga with a decorative purple horizontal stripes.  There are three variations of the trabea with respective significance, as mentioned by Servius in a commentary on the Aeneid, within book 7 (Smith 1875: 1137).

(36) Triptolemus: in Greek mythology the one to whom Demeter (Ceres) assigned the distribution of corn (Coleman 1988: 93). [image of Triptolemus on wheeled appliance, holding ears of corn painted on Attic black figure pottery]

(37) Lyaeus: “the Releaser,” from a Greek derivative typifying one who relaxes inhibitions (Coleman 1988: 94), another name for Dionysus/Bacchus (shown below) 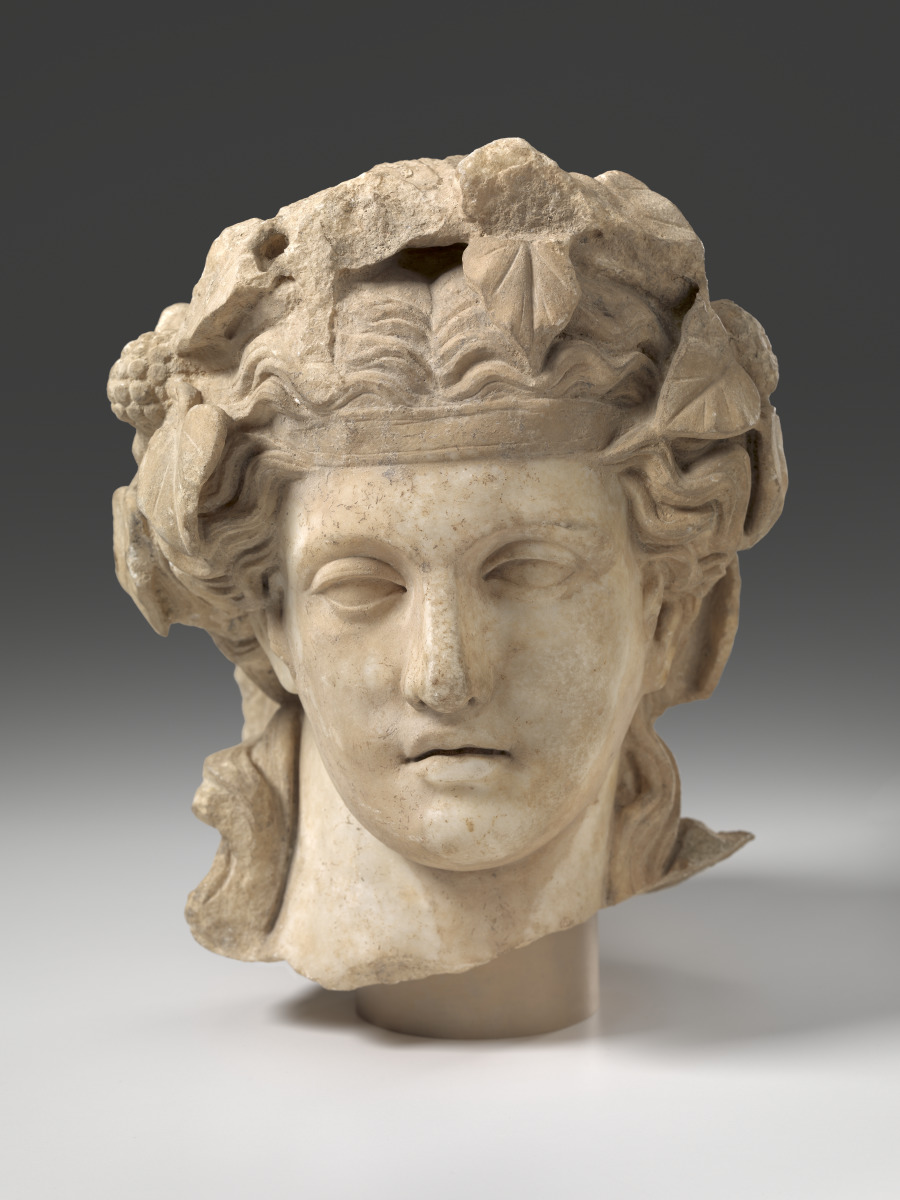 (40) “rather for him,  . . . the man himself” (ipsum, ipsum): the anaphora helps focus the gaze on Domitian and only Domitian, as Statius the narrator makes clear

(41-43) “in countenance… in his face” (vultu…ore): By drawing not only his gaze, but also the gaze of the reader to Domitian’s face twice, Statius creates a realm of meta-spectacle in which the narrator/author is cognizant of his role in directing the reader’s gaze as a side effect of his own gaze.