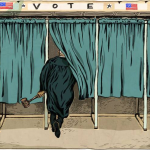 President Trump celebrates his appointments to the Supreme Court as political victories.[1] At a rally he boasted to his supporters that “Justice Kavanaugh now sits alongside Justice Gorsuch to defend your rights, your Constitution, and your God-given freedom.”[2] Trump recently released a list of people he is considering appointing if he gets reelected and there’s a vacancy on the Court.[3] Joe Biden has promised to release his own list.[4]

The major-party presidential candidates wield the Court as a political tool more now than in the past because voters increasingly care about the institution, ranking Supreme Court appointments as the third most important issue this election, just behind the economy and healthcare and ahead of the novel coronavirus.[5] Voters’ heightened interest in the Court stems from the Justices’ deciding cases on ideological, partisan grounds more than ever before.[6] The Court’s polarization stems largely from party homogenization and ideology-based party identification among voters.[7]

In the past, parties represented diverse groups of interests that did not always align with each other. The Democratic Party of the 1960s, for example, included Northerners and Southerners who had major disagreements with each other, particularly on issues related to race.[8] For example, a greater percentage of Republicans than Democrats voted in favor of Democratic President Lyndon Johnson’s landmark Civil Rights Act of 1964.[9]

Over the last several decades, however, the two main parties have grown further apart and less internally fragmented. By the 1980s, most conservative Southerners had moved to the Republican Party.[10] “[A] much smaller residual Democratic Party in the South, purified of these voters, came into ideological alignment with Democratic voters in the rest of the country through a mutually reinforcing feedback process.”[11] Additionally, voters have increasingly aligned themselves with the party that reflects their ideological values.[12] Few conservative Democrats and liberal Republicans remain.[13] This partisan sorting has divided Congress; by 1999, the most conservative Democrat senator had a more liberal voting record than the most liberal Republican senator.[14]

Over the last few decades, the Supreme Court has followed Congress’s direction.[15] From 1910 to 1920, the earliest time period for which quantitative analyses are available, Republican-appointed Justices did not rule any more conservatively than Democratic-appointed ones, and vice versa.[16] Even during the contentious New Deal period, the Justices did not always split based on party.[17] Democrat Harry Truman’s four appointees turned out conservative, and two of Republican Dwight Eisenhower’s appointees voted liberally.[18] However, Republican George H.W. Bush’s appointment of David Souter marked the last time a president nominated a Justice who voted more often in opposition to the president’s party’s ideology.[19] The slow turnover rate of Justices insulated the Court from the effects of the parties’ homogenization for a few decades, but by 2010 every Justice on the Court appointed by a Democratic president had a more liberal voting record than every Republican appointee.[20]

With the parties more homogenized and Justices voting on ideological grounds more than ever in recorded history, presidential candidates will continue to politicize Supreme Court nominations and use their appointment power to win over voters.[21]

[1] See, e.g., https://www.pbs.org/newshour/politics/tremendous-victory-trump-celebrates-kavanaugh-win (“I stand before you on the heels of a tremendous victory for our country.”)

[6] See Carl Hulse, Political Polarization Takes Hold of the Supreme Court, N.Y. Times (July 5, 2018), https://www.nytimes.com/2018/07/05/us/politics/political-polarization-supreme-court.html (“It is clearly the most partisan court ever, where you can actually look at Republican and Democrat and use that as a proxy for voting and behavior on the court.”).