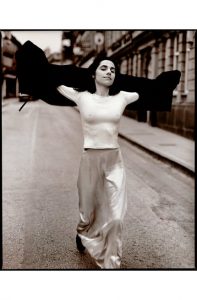 British female artist, Polly Jean Harvey uses her range of blues inspired vocal skills, haunting lyrics, and rebellious sexual image to fully embody the breakdown and reconstruction of gender roles on her third studio album, To Bring You My Love, released in 1995.

Born on October 9, 1969, Harvey was raised on farm near Bridgeport. She is the daughter of a quarryman and a stonemason, and was constantly exposed to rock music and blues from a young age. She had mastered a variety of instruments at a young age such as the violin, guitar, bass, piano, saxophone, and melodica just to name a few. Harvey attended visual arts school at Yeovil College, but in June of 1988 she decided to dedicate herself fully to her musical career, and joined a trio at the start of 1991. They released two studio albums together Dry, in 1992, and Rid of Me in 1993 (The Great Rock Bible). After the critical success of the albums, and extreme inquiry into Harvey’s sex life due to the sexual nature of the topics discussed, Harvey had a breakdown which led her to having a very controlling personality in terms of the image she would portray to her audiences. Harvey then decided to go solo, wanting to have more creative freedom with instrumentation and image. In 1995 she released her most critically acclaimed album To Bring You My Love. As a female artist, Harvey’s music heavily focuses on issues of femininity and the role of the mother, despite not having any children of her own. This webpage will specifically focus on the two songs, “To Bring You My Love” and “Down By the Water” to show the ways that Harvey uses her blues influence and musical ability to comment on the expectations of femininity that women must navigate throughout their day to day lives.