Motley Crue was a heavy metal band that formed in Los Angeles, California in January of 1981. The group was created by bassist Nikki Sixx and drummer Tommy Lee after they each quit their respective bands in search of something new; a style with the spectacle of glam rock and the edge of punk. (Jeffries) Lead singer Vince Neil joined next with lead guitarist Mick Mars, whom Sixx and Lee found through a classified that began: “Loud, rude, aggressive guitar player (McNamara).” 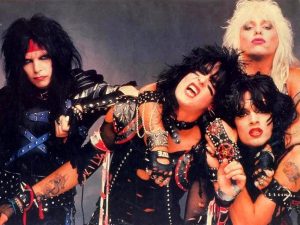 “I wanted a band that would be like David Bowie and the Sex Pistols thrown in a blender with Black Sabbath.” -Nikki Sixx

The band rose to popularity during the height of the American Evangelical movement and in the wake of many satanic accusations against many famous rock musicians. Inspired by these musicians, and perhaps simply wanting to revel in the following chaos, the band infused satanic imagery into their music and appearance to go with their already over-the-top personalities, catapulting them into the mainstream music scene by their second studio album. “It was a full-on fight to see who would top each other, on stage and off,” says Sixx. “We would set ourselves on fire, literally. Our egos and drug abuse were absolutely out of control. It was a wonderful time (McNamara).”

Motley Crue used aggressive sounds, lyrics, and satanic imagery to express mockery and contempt for society while also creating a spectacle of themselves for their fans. While choices made surrounding the satanic imagery were mostly made for the sake of commercialization, outrage marketing, and publicity, many, especially parents, took these satanic allegations very seriously, placing a stigma on some fans and having dire consequences for others.