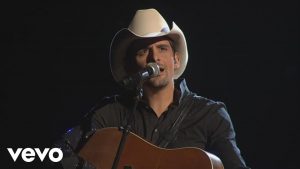 Country music is a popular genre in the United States that gained status when it was developed in the southeastern states during the 1920’s. The first songs were considered simple folk music with use of instruments such as the guitar, drums, fiddles, and harmonicas. The roots of country music were known as western music and was often represented by cowboys which is still seen today along with other themes such as farmers, fishermen, and hunters. These theme are often associated with male perceptions, which is noticeable in country music as only 11.3% of country music songs were sang by women in 2019. The lack of representation of women has given country music the nickname “bro country,” which has led to misogynist lyrics, high levels of sexualization, and asserting dominance over women.1Swartz, K., & Swartz, K. (2016, May 18). Retrieved December 2, 2020, from https://sites.williams.edu/engl117s16/uncategorized/reclaiming-male-dominance-through-country-music/ Although there is evidence of these portrayals of women in country music, there are also many positive representations of woman in male country songs. This paper will analyze the different ways country music lacks female representation, and how male country singers portray woman through lyrical representations and the deeper implication behind them. 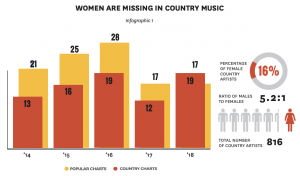 Country music genre has experienced a severe underrepresentation of woman as trends slow growth of inclusion or even a decline. Even though woman represent around 50% of the population in America, only 16% of country artists are woman.2USC Annenberg. (Ed.). (2019, April 26). “No Country For Female Artists.” Retrieved December 1, 2020, from http://assets.uscannenberg.org/docs/no-country-for-female-artists-research-brief_2019-04-04.pdf The chart above also shows the trends of female country singers on the popular and country charts. Since 2014 the highest percentage of woman on the popular charts was 28% and 19% for country charts in 2016, which has remained the same until 2018 while popular charts dropped back down to 17%. Given the social environment that we have experienced during the 21st century, many industries have implemented progressive agendas that has allowed more inclusion of all individuals. We should expect the same trends for country music, but surprisingly the charts have declined or remained flat. Another revealing statistic is the number of males to females that earn American Country Music nominations. Research shows that 85% of these ACM nominations were male, and the 15% from woman for entertainer of the year reflects Carrie Underwood and Miranda Lambert.3USC Annenberg. (Ed.). (2019, April 26). “No Country For Female Artists.” Retrieved December 1, 2020, from http://assets.uscannenberg.org/docs/no-country-for-female-artists-research-brief_2019-04-04.pdf Similar to this statistic, many other awards received by woman are only representing a small number of woman who earn multiple awards. Additionally, the mean age of top performing male artists is 42 whereas top performing female artists are 29 on average. In a male dominated genre of music, female artists are heavily reliant on their appearance in order to gain popularity and succeed. Once they reach a certain age they quickly fall off the top charts, whereas males continue on with their careers. All of this data shows how female country artists are underrepresented and forced to rely on appearance for success, while men dominate awards and top charts while also enjoying longer careers.

As a four-time billboard music award winner, Luke Bryan has clearly marked his spot as Country music’s most successful artists. Throughout the years 2012-2015, Luke Bryan swept the top Country Male Artist award, and in 2013 won Entertainer of the Year.4Luke Bryan. (2020, December 09). Retrieved December 2, 2020, from https://en.wikipedia.org/wiki/Luke_Bryan At 44-years old, Luke Bryan remains at the top of country music’s most well known artists, and there has been no signs of him slowing down. As mentioned above, men are seen to have much longer careers than women in this industry because of the heavy emphasis on physical attraction and beauty for women success. One of Luke Bryan’s top songs, “Country Girl (Shake It For Me)”, places a demeaning shadow on women and how they are viewed in country music. The lyrics of the song cast a strong message towards the physical attraction men have for women and how they please men with their body and beauty. The first few lyrics of the song immediately target the women’s appearance by saying, “Hey girl come on now, you know you’ve got everybody looking.” which immediately kickstarts the degrading of women from the beginning. As the song progresses, it continues to evolve to men watching the girl “do her thing” which symbolize a sexual appeal that men find attractive. The song also places a strong emphasis on sex with lyrics such as, “Shake it for the birds, shake it for the bees,” and continues to reinforce the message with the chorus by singing, “Country girl, shake it for me girl, shake it for me girl, shake it for me. Country Girl, shake it for me girl, shake it for me girl, shake it for me.” With this song being very successful and sung by one of Country Music’s top artists, it demonstrates the role in which women are portrayed from a males perspective and how this gender difference is consistent throughout country music as a whole.

Although we find evidence of sexualizing woman in many country songs, it’s interesting to understand the artist outside of their lyrical work. Luke Bryan has been happily married for 14 years. Not only that, he publicly mentioned how his wife financially supported him throughout his career prior to his fame. In a Peoples Magazine article, it mentioned that Luke Bryan said, “When we got married, her career supported me when I was making about $10,000 a year,” Bryan said. “She was the one bringing in the dough.”5Tracy December 08, B. (2020, December 08). Luke Bryan Celebrates 14th Wedding Anniversary with Wife Caroline: ‘What a Ride It Has Been’. Retrieved December 2, 2020, from https://people.com/country/luke-bryan-wife-caroline-celebrate-14th-wedding-anniversary/ It’s evident that Bryan is very respectful to woman and acknowledges the support his wife gave to him, and that woman can be the one with a career in the relationship. This could be revealing that the lyrics in these top charts country music songs could be fueled more from producers in search of profits or possibly the expectations from country music listeners.

Another well-established artist in the country music industry is Toby Kieth, who has received many rewards and has demonstrated degrading messages towards women since the early 2000s. Toby Kieth is a three-time billboard award winner by winning top country artist in 2002 and 2005, along with winning Country Album Artist of the Year in 2005.6Toby Keith. (2020, December 10). Retrieved December 2, 2020, from https://en.wikipedia.org/wiki/Toby_Keith It is no secret Toby Kieth has had tremendous success in the industry. While winning these awards, Toby Kieth’s music has been seen to downgrade women’s status and reference them consistently in sexual ways. One of Toby Kieth’s top songs, “Who’s Your Daddy”, reflects the sexual satisfaction that women provide men and the expectations women are supposed to demonstrate. In this song, Toby Kieth sings, “Yeah, you’re lookin’ right, lookin’ good, Lookin’ like a woman should so why is it so hard to find,” which immediately targets the women’s sexual appeal and the attraction she is providing to him. Later in the song, the lyrics take a turn towards the women’s role in comparison to men by saying, “I got the money if you got the honey, Let’s cut a deal let’s make a plan, Who’s your daddy? Who’s your baby? Who’s your buddy? Who’s your man?”. These lyrics immediately generalize a woman’s role to satisfy their man with sex while the man makes the money, these lyrics downgrade women and again reflect male dominance in country music. It’s also noticeable that many country singers like Toby Keith use words such as “baby” to place woman in a position on inferiority. We can see that Country Music has remained constant over the years and is clear that the way women are viewed in the industry is often degrading and placed below men.

Although there is an abundance of evidence of male country singers creating lyrics that is aimed to sexualize woman, this may not always be the case. Lee Brice is an American singer and songwriter who earned the top country song of 2010 with the song “Love Like Crazy.”7Lee Brice. (2020, December 04). Retrieved December 2, 2020, from https://en.wikipedia.org/wiki/Lee_Brice In the song, “One of Them Girls,” the lyrical implications go against the grain of the typical stereotypes male country singers portray of women. In the beginning of the song Lee Brice is referring to a girl that “Just might run the pool table.” This is an immediate implication that Brice is portraying woman as something other than a sex appeal, and can express themselves in other ways. Running the pool table is also expressing how women can be dominate in something regardless of whether it’s up against a male or not. The song goes one to say “You’re one of them girls that ain’t handin’ out your number.” This is also significant since we’ve seen a lot of country songs singing about woman being sexually active or trying to impress their man. Lastly, it’s worth noting that Brice never uses demeaning words such as “baby” when describing women to place them in a position of inferiority.

In conclusion, the genre of country music is struggling to increase representation of woman, while many male artists portray woman in a negative light through their lyrics. The genre as a whole clearly lacks the ability to include woman, as 16% of country artists are woman. Female country artists also face higher expectations in order to be successful such as being attractive and young, as research shows a sharp decline in success with age for woman compared to men. The top country artists of the last 20 years have all had a similar portrayal of women in their songs which is to sexualize them and be demeaning. Lyrics such as “shake it for me,” “baby,” and “I got the money,” are all used in order to place woman in a position of inferiority. Although this trend doesn’t seem to be going away anytime soon, it’s important to notice the artist outside of their work and the respect they show towards woman. Additionally, there are some songs that empower women such as Lee Brices “One of Them Girls,” which portrays woman as independent and not looking to please men. Moving forward, it will be intriguing to see if the genre of country music will increase the inclusion of woman, and if lyrics will start to shift to a more positive treatment of woman.