It is no surprise that there is a common projection through Disney princess movies. There is a horrible villain that is trying to ruin the happiness of a beautiful princess to be, and somewhere along the way she falls in love with a handsome man who saves her somehow. Everyone is familiar with that trend and has become comfortable with that ideal narrative for every little girl to dream about. Then Frozen came into the picture. Finally, a princess movie contained relatable characters who were not completely helpless and lost without a big strong man. Female characters were finally focused on themselves and the directors even managed to sneak in some content regarding homosexuality, a topic that Disney has not dared to touch. This movie is loved by both children and adults, has one of the best soundtracks of all time, and provides a heartwarming lesson of love. Frozen is the most progressive Disney princess movie to date, specifically in gender roles and sexuality.

The first introduction that we get to the demeanor of a character is with the song “For the First Time in Forever” by Anna. Immediately, the audience falls in love with Anna and her bubbly, clumsy, and goofy personality. The music does a wonderful job of furthering her character development and matching the tone of the music to help the audience connect with her on a deeper level. The key of the song is of course major and contains beautiful melodies that are filled with joy. Unlike the typical solos that are sung by Disney princesses, Anna’s is powerful and sang with gusto, rather than softly and almost with a polite demeanor. The musical instruments include strings and trumpets which add a powerful sound behind Anna’s voice and speak to the strength of her character. Also, as Anna is finally free from the castle for the first time in forever, symbols crash as she frolics outside, a sound that is not generally used in a female solo in Disney movies. The high wind instruments are only sprinkled into the song, whereas they are normally the primary instruments in princess solos. Anna’s is filled with trumpets, trombones, and medium-toned string instruments. As Anna is running around the castle, it is clear how clumsy she is, which is not traditionally “princess-like” behavior. The humor that her character provides makes her incredibly relatable for young girls who are part of the target audience of these movies. This is important for young girls because these characters that are viewed as ideal heavily influence gender roles within society. It is very progressive and impactful that Anna is so strong, yet goofy which is amplified by the music supporting her in her defining solo.

Elsa is a complex character who changed through the production of the movie. During the scene of her coronation party, a very pivotal scene in the movie, the underscoring reveals the character that the directors originally intended Elsa to be. Towards the end of the coronation party, when Elsa and Anna start to get into a fight, music comes into the background of the scene. As Elsa accidentally uses her ice powers, a deep and luminous tone begins to play, one that typically plays behind villains. The instrument that is being used to generate this sound is a low-pitched brass horn, one that sounds like a trombone. The melody comes in strong and then fades slowly into the background, one that is typical when villains are doing something evil. Elsa was originally intended to be the evil ice witch character in the movie, which is demonstrated here before her character’s pivotal moment. Without the underscoring of this scene, the audience would not have learned the especially important detail that Elsa was supposed to be the villain. As seen with the character Ursula in The Little Mermaid, Disney typically makes female villains less feminine and represents a stark contrast with the female lead33. This is done not only through physical characteristics but also by their songs being more like the typical male music. Elsa does not fit this typical mold by Disney because her character is still clearly feminine, even though her voice is deeper than Anna’s, being that Anna is a soprano while Elsa is a mezzo-soprano44. The underscoring demonstrates that she is a villain through the heavy brass instruments and powerful percussion, in contrast to the high strings that are prominent in the underscoring of Anna’s scenes. The detail that Elsa was originally supposed to be a villain is an important piece of information in the analysis of her big solo.

Following this scene, Elsa runs off into the night, and the audience gets to experience one of the most popular Disney songs of all time, “Let it Go”. This is Elsa’s big “I want” song that is so common in Disney movies, where the audience gets a musical rendition that expresses the inner desires of a prominent character. “Let it Go” is the first Disney princess song that embodies female self-empowerment, unlike any movie before. Elsa is finding her independence, which is the most progressive aspect of the movie in comparison with typical female gender roles. One of the defining characteristics of the typical female villain characters is their independence and isolation. In The Little Mermaid, Ursula is completely isolated in her cave and takes care of herself53. That is just one example of this trend that is prominent in princess movies. Through the music, we learn that, yes, Elsa was supposed to be a villain and she starts to have the normal characteristics. She runs into the woods to be independent and isolated. Then, there is a shift, and her character has a complete transformation, one that is told through music. After the line “Well now they know!”, there is a beautiful shift from a minor to a major key. Before this line, Elsa has had dark and luminous music surrounding her character, but then something changes. Her independence and isolation are no longer terrible qualities. She begins to feel comfortable with herself and realizes that all she needed all along was her independence. The piano is prominent in this song, as well as high strings. As the song continues and Elsa becomes more and more comfortable with herself, trumpets flood behind the string instruments to make a powerful sound. This empowerment sends a strong message that it is not bad to be independent. A quality that normally signifies a villain, becomes a symbol of Elsa’s happiness and strength. 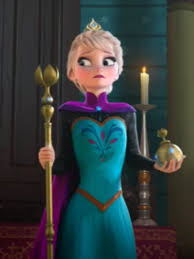 One of the aspects of Elsa’s independence that is not typical in Disney princess movies is that she finds her happiness herself, not through a handsome man. This point is made farther through her physical transformation that happens during “Let it Go”. She goes from conservative and reserved to a look that suits her much better and demonstrates her freedom. Her “make-over” was for herself, not to impress or obtain a man.

The most influential line in “Let it Go” is, “Conceal don’t feel/ don’t let them know/ Well now they know”. The power of this line is displayed through the music because it lines up with the transition from minor to major keys. Elsa is defined through this line and with it, she is finally free. The LGBTQ community has identified with this line deeply and it has become a “coming-out” anthem76. This is the first time that a Disney princess movie has created some relatable content for the homosexual community. The empowerment that is generated through this song, all routed in the transition of keys, has a reach that no other Disney song has been able to generate. The song is not just a catchy, upbeat tune. It has a deeper meaning for both females and the LGBTQ community, all through the symbolism generated by the music and enhanced by visual imagery.

Frozen did what no Disney princess movie has done before. The directors snuck in a homosexual character. The character Oaken, who runs the little store that Anna and Kristoff stumble into, is gay98. He does not get much screen time, but during his scene, he says “Hello family!”, and his husband and kids pop up in the sauna. Not only is it progressive that there is a clear gay character, but he also has a large family. This has not happened in Disney princess movies and created yet another great connection with the LGBTQ community.

The movie Frozen is the most progressive Disney princess movie to date for many reasons. The overall plot is the love story between two sisters and their journey of growing separately to better their relationship. Both Elsa and Anna have complete character transformations that allow them to develop into strong independent women. Disney princesses shape how young girls create their ideal lives in their head and thus heavily influence gender roles in society. The directors did a great job of following a lot of the norms in typical princess movies but adjusting aspects that were most influential. The addition of a gay character, may not seem like a big deal, being that he played a small role. However, no Disney princess movie has broken that barrier. Now, the door is open for future productions to run with the influence that Frozen created. Change happens gradually and this movie was able to start that change, and the symbolism that was presented through music made its impact even greater. Frozen was not only one of the most widely popular Disney princess movies but also the most progressive.