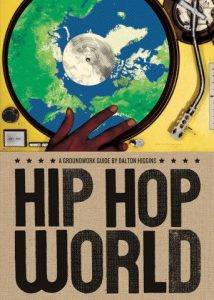 Hip-Hop is a very popular genre of music, and stands out for being very distinctive in both its sound and themes. A strong, very rhythmic beat with very quick vocals. A rather simple formula, but its catchiness and lyrical depth captures the hearts of many, including me!

However, there is no denying that in American hip-hop, there is a very distinct and strong archetype. The music often is very “masculine”, with often African-American men rapping about victory, power, revenge, overcoming oppressions/their enemies, and so forth. Within the realm of power comes sexuality as well, with the men often hyper-sexualizing females to demonstrate their masculine strength and superiority.

I was quite intrigued, because given how accessible music is, it seems like most genres morph and dilute themselves quite quickly. American Pop, Rock, and even Country have changed with the times, and its difficult to as strongly characterize the image of the genre itself. But it feels like we can for American Hip-Hop. I believe this is the case because Hip-Hop began as a voice for the oppressed, as African-Americans grapple with the centuries of systematic racism & prejudice present in their daily lives. Thus, the themes of overcoming adversity, victory, and besting one’s enemies hold deeper meaning.

However, I began to wonder, if we give that the resiliency of the themes of Hip-Hop are due to its cultural beginnings, how does this account for Global Hip-Hop? The African-American experience cannot be the foundations for the musical genre in other nations, so how do they develop?

In this essay, I will be exploring these very questions. I will be looking at four different hip-hop artists, and seeing how their music either subverts the themes of American Hip-Hop, or re-establish themselves within the structure. While the lyrics will of course be looked at, I will also analyze the music’s musical structure, instrumentation, and so on, to see if they align with the themes of masculinity and hyper-sexualization.

The first song I will look at is Agust D’s Daechwita. Agust D is a South-Korean rapper who is also well known for being SUGA, a member of the massive kpop boy band BTS.

I was fascinated to see how South Korean rap/hip-hop reimagines the genre, and I was not disappointed! The song opens up with the chanting and instrumentation common in Daechwita (대취타), a genre of korean tradtional military music that is played for the changing of the king’s guard, or when the military is victorious at war. The musicians march, and play traditional wind and percussion instruments such as a nabal (나발), nagak (나각), and taepyeongso (태평소).1KBS World Radio. “Daechwita.” Korean Broadcasting System, August 5, 2020. http://world.kbs.co.kr/service/contents_view.htm?lang=e&menu_cate=business&board_seq=388839&board_code=akorea_economyPlus.

The verses and chorus bring that the heavy bass of typical rap music, but incorporates the taepyeongso and other traditional instruments periodically. Agust D speaks of his growth and strength, how he was “born a slave but now a king.” The lyrics and video imagery are full of boasting and trash talk, although there are quite a few references to korean culture, such as Gwanghaegun, the fifteenth Joseon dynasty king, and of rice chests. 2Genius. “English Translations – Agust D – 대취타 (Daechwita),” May 22, 2020. https://genius.com/Genius-english-translations-agust-d-daechwita-english-translation-lyrics.

This was a fascinating song to analyze. I feel like this song retains many of the themes of masculinity/gender that American Hip-Hop holds. The music is heavy and quick-paced, and Agust D raps quickly, with no melodic singing (which is often seen as adding femininity to a rap song). In general, it seems like singing and melodies are seen to be feminine, reminding me of our discussion on disney princesses vs female villains. I suppose rap mirrors the way the female villains sing, and that would also align with the idea that the style of rap is seen as more masculine, with more standard singing in a rap song being seen as feminine.

There is not any kind of sexuality expressed in this song, but it does not actively subvert it. Instead, I would say that the song fits the general character of American Hip-Hop, but with a South Korean flair. The use of daechwita music and instrumentation still places the themes of masculinity, power, and victory into our minds, but in a uniquely South Korean way.

Another song I will be looking at is another male artist, and is from a region I am quite familiar with. The song is BAD BOY TANMOY by Tanmoy Saadhak. Tanmoy Saadhak is from Kolkata, India, which largely speaks Bangla. My parents are from the neighboring nation of Bangladesh, which also speaks Bangla.

Now, this feels so much like a parody song. The beat sounds like a generic rap beat you can find online. It uses very typical synths and rhythm, with nothing unique (unlike Daechwita). Saadhak also wears a baseball cap, sunglasses, and a chunky chain. He is surrounded by two women also wearing sunglasses, who chant “bad boy bad boy~” during the chorus.

It is clear that the artist pulled apart the most superficial stereotypes of American hip-hop, and placed it into his own song. The song exists purely to boast himself as an alpha-male of sorts, which women fawning over him and others jealous of his success.

This is likely the unfortunate reality of Global Hip-Hop in some regions. Reflecting on the culture of that region from my own experiences, the lack of actual black culture and people make it easy for people to stereotype any form of black culture in a superficial way. While Saadhak is not being derogatory, he is copying the formula of the genre without any understanding of its roots or the experiences of black people, which makes the imitation come off as insincere or funny. There is no Indian flair to this song besides the language itself, so it does not go against any of the themes of gender or sexuality.

The next two artists are European females, which already will greatly alter the themes of gender and sexuality, as both of them are heavily seen through the male gaze. The first song is GOURMET by Danish rapper NIKOLINE. As a warning, this song has a ton of nudity and shows sex in it. 3NIKOLINE. “Nikoline Music.” Accessed December 9, 2020. https://www.nikolinemusic.com.

According to the google translated version of the song, the lyrics are very remiscient of Daechwita and even BAD BOY TANMOY, in that she boasts about her lyrical prowess and superiority to the listener, calling herself “gourmet” compared to the listener being “Burger King” or “McDonalds.” 4Genius. “Nikoline – Gourmet Lyrics,” June 12, 2020. https://genius.com/Nikoline-gourmet-lyrics.

The music itself has this airy … flute like sound present throughout the song, but this gives the song a rather disturbing, creepy mood to it. The chorus and other parts of the song become faster paced, making the song seem to grow angrier and more frustrated, to match the lyrics and rapping of Nikoline.

This song, when compared to the two themes of gender and sexuality that I am exploring, seems to embrace the female sexuality, but makes the viewers uncomfortable by using the female gaze, instead of the male gaze. Most hip-hop music, and in society as a whole, sexualizes females for the pleasure of men. Nikoline shatters this expectation, by showcasing lesbian sex, a pregnant woman’s body, and other features in a way that would make people uncomfortable. This might be similar to how in madrigal singing, which was mainly men singing about sexual things, a woman singing the same piece would be hyper sexual. There seems to be a double standard present, like with Nikoline’s music.

Apparently, naked bodies in Denmark are not stigmatized as much in comparison to America, so Nikoline’s work can be an example of this. Overall, she seems to be a controversial artist, regardless of nationality. However, I find it fascinating that she is subverting the themes of hip-hop in such a way, and is able to remove herself from the cultural restraints of the genre’s beginnings. She embraces the style of rapping, the boastful lyrics, and high tempo music, but flips people’s expectations by showcasing the female gender and sexuality in her own way. I find her work a great example of how Global Hip-Hop can make the genre morph and evolve in fascinating ways.

The final artist is Keny Arkana, an Argentine-French rapper. She was born and raised in France to an Argentine family, so she is Argentinian ethnicity wise. I will look at her song “V pour Vérité” (T for Truth).

The song is simultaneously the most distinct from the stereotypical themes of gender and sexuality that I have listed before, but also touches to a deep tradition within hip-hop, which is its use to fight against systems of oppression. In the video, her group holds up the phrase “La rabia del pueblo,” meaning “the rage of the people” in Spanish. 5Lou, Marie. “Keny Arkana – V Pour Vérité Lyrics + English Translation.” Lyrics Translate, October 7, 2013. https://lyricstranslate.com/en/v-pour-v%C3%A9rit%C3%A9-t-truth.html.

That phrase encapsulates the message of the song perfectly. Her song is a call to action, for listeners to become aware of the government silencing and punishing them, and how they instead must revolt from such treatment. The video’s message is very explicit, with Arkana and her group hijacking news outlets to speak her truth.

The music is interesting, as the gaps within the song of the newscasters are both a part of the video and the song itself. As such, the song becomes almost theatrical or literary, with the introduction of multiple characters and interruptions. The song begins with a generic news channel melody, and is interrupted by a high-tempo, merciless beat that Arkana raps over. The intensity of the beat and her rapping never slows down, which can feel overwhelming to the ears, so the song does not follow the typical structure of verse, chorus, etc.

This song interweaves the different themes in an interesting way. Her song seems devoid of any themes of gender and sexuality, as it is instead a call for action, and not a song about herself. She does not present herself to make any statement of her character (which is all that Saadhak did), but instead she was simply a vessel to get her political messages across. This rejection of boasting her ego is unlike any of the songs we’ve explored in this essay, and it is very refreshing to see.

However, while her song does subvert many of these themes, there is still something very authentically hip-hop in its content, and yet powerfully French. Arkana is an active member of civil disobedience movements in France, and there have been different periods of unrest and rioting in France over the past two decades. Through the powerful rapping and anger towards injustice, Arkana also harkens back to the foundations of American Hip-Hop, that was also a genre for a marginalized group to have a voice.

So what have we learned? The globalization of music has brought such vibrancy and diversity to many musical genres, and Hip-Hop is an interesting case of this. American Hip-Hop holds tighter to certain themes and musical sounds/structures than other genres, and this does not really change once we leave the borders. Global Hip-Hop shows instances of artists adding a global flair to their music and messaging, but can also show how the themes of boastful masculinity and hyper-sexualization is alluring to all people, regardless of where they are from. It was fascinating to explore Global Hip-Hop, and I am excited to see what else it has to offer!