Les Miserable is one of the most successful musicals ever being presented in the Broadway theaters. Like many other successful musicals, Les Miserable became a movie in 2012. I can still remember the first time I was watching Les Miserable. It was during thanksgiving of 2016. It became one of my favorite movies, and I have watched it four times ever since. There is just something special about this musical. From the French Revolution to a sinner’s progress to a saint, Les Miserable exposed the social inequality and the class struggle in France. Les Miserable looked deep into humanity and Christianity from love triangles to the debate on justice and grace. Although the musical’s primary focus is on the class struggle and the meaning of grace, the theme of musical and dramatic presentation of gender is also present in Les Miserable. 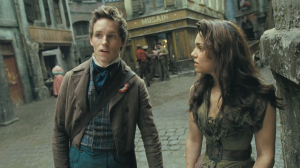 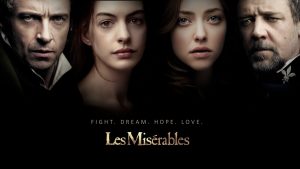 The variety of topics Les Miserable covers makes it challenging to understand this musical. Therefore I will be focusing on the four main characters and the two supporting characters’ backgrounds.

After nineteen years in prison, Jean Valjean is released on parole with his yellow ticket-of-leave, which he always needs to carry with him, identifying him as a thief. He is mistreated everywhere he goes until he met Bishop of Digne. The Bishop offered him a place to stay and warm food to nurture his body. In desperation, Valjean steals some silver from the Bishop. After being arrested by the police, the Bishop tells the police that he gives those silver to Valjean and asks Valjean to use those silvers to do good things. Valjean realizes the Bishop has given him a chance to live a better life. After repented in front of the cross, Valjean decides to start his life with a new identity. Eight years later, he becomes a factory owner and the Mayor of a small town.

One of Valjean’s workers, Fantine, has an illegitimate child. Her co-workers discover it and ask for her discharge. The manager of the factory, who tries to advance on her and she rejects, fires her. With a child to take care of and nowhere to work, Fantine sells her hair and teeth and eventually became a prostitute. After she rejects one of her prospective customers, the customer files a report to Inspector Javert. After Valjean recognizes her from the factory, he takes her to the hospital and promises to take care of her daughter Cosette.

One time an elderly man is pinned under a cart, Valjean saves him by lifting the cart, which requires extraordinary strength. Inspector Javert, who vows to catch the parole-breaker with exceptional strength, recognizes him as the runaway parole-breaker. Javert confronts and fights Valjean in the hospital. Valjean runs away again. After that, Javert vows to bring Valjean to justice.

After Valjean runs away from Javert, he saves Fantine’s daughter, Cosette, from the horrible couple who runs an inn. Nine years later, Cosette grows up under the protection of Valjean. She falls in love with a young revolution leader, Marius, who vows to establish a France with liberty and equality.

Marius is a passionate college student who vows to bring France liberty and equality through revolution. Although a wealthy family raises him, he hides his identity as a poor revolution leader. He is entangled in a love triangle between Cosette and another girl Eponine.

Eponine is the daughter of the horrible innkeepers. Eponine is blindly in love with Marius, who never returns her love. Eponine eventually joins the revolution and dies in the arm of Marius.

When little Cosette is first introduced in “Les Mis,” she is singing “castle on a cloud.” Her song was performed by woodwind instruments and harp, which presented a vibe that suggests she is someone very pure, vulnerable, and naive. In contrast to instruments’ choices, the lyrics of “Castle On a Cloud” is rather sad. “I know a place where no one lost / I know a place where no one cries / Crying at all is not allowed. ” Although it is a sad piece of music, Cosette’s songs always highlight her sweetness, kindliness, and innocent personality. As a character in the musical version (not the original Victor Hugo version), Cosette always appears as an angel or someone who does not belong to this chaotic world. Yet, she is just like another princess that needs to marry her prince.

Fast forward nine years, Cosette meets a passionate revolutionary leader, and they few in love at first sight. They are singing a duet  “A Heart Full of Love” during that moment. Cosette’s soprano follows string instruments such as violin and harp which again represents this Disney princess-like characteristic. The lyrics of the score, such as “A heart full of love / A heart full of you / A single look and then I knew / For it is not a dream” do suggest the gender stereotype that finding love is the purpose of a woman. The music of “Les Mis” portrays the ideal woman with woodwind and string instruments that suggested pure, innocent, docile characteristics.

In contrast to Cosette, Valjean would be the most masculine character in “Les Mis.” Valjean’s music is usually accompanied by powerful brass instruments, and we can always hear the drums in the back. Those instruments usually highlight his strength in both physical and spiritual. When Valjean is first introduced in the musical, he is a prisoner who is trying to pull a heavy ship into the harbor. His superhuman strength is parallel by the powerful, fast tempo song “Look Down.” The brass instruments and the rolling drums in the score provide a war-like situation, which those are traditionally affiliated with men. Valjean’s story “Les Mis” accompanied many moral struggles, and he has played many traditionally strong masculine roles, such as the guardian of Cosette, the mayor of a town, and the owner of a factory. Interestingly, his music sometimes does have some amount of femininity. When he is in a moral dilemma, or when he is deciding which choice to make, the music softens, often accompanied by string instruments. However, once a moral decision, his music becomes louder, with brass instruments replacing the string instruments. The perfect example of this would be “Who am I,” in which Valjean decides to save an innocent life by turning himself into the judge.

We know that musicals usually represent the “bad guys” with a deep singing voice, which is usually accompanied by music that is in a minor key. Interestingly, all the male main characters are singing in baritone, which creates confusion. There is no one specific bad guy in “Les Mis,” even though Javert is usually decried as the antagonist. Rather, “Les Mis” has covered various topics, including grace and justice. One theme that goes through the whole musical is the theme of change. Valjean changes from a thief (a villain) to a respectable man who is willing to sacrifice his life for others (a hero). Javert, as a police chief, believes that a thief will always be a thief. The belief has made Javert a villain since he is pursuing Valjean (a hero). Once Javert realized the importance of grace after Valjean saves his life, he understands that people will change. Thus he stops persecute Valjean. Since there is not necessarily a villain in “Les Mis,” which makes it unnecessary to have any characters to sing in a deep voice.

Les Miserable has some of the most memorable music scores due to the fact that many songs have similar tunes. These tunes have really helped us memorize those scores. Each tune usually affiliates with one of the main characters, and those tunes also represent the gender and characteristics of the characters. Although critics blame “Les Mis” to have gender stereotypes of women, those music scores still help the viewers to understand each character from a different angle. And I believe those music “cues” have really help me to understand the plot line while I was watching the musical.