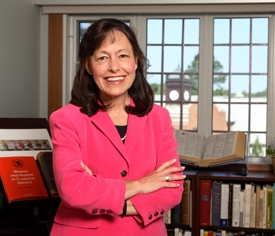 Director of the Speech Center since its founding in 1996, Linda Hobgood has served on the faculty of the Department of Rhetoric and Communication Studies at the University of Richmond since 1990. Areas of specialization include public speaking, speech writing, interpersonal communication, group communication, business and professional speech, and political rhetoric. Courses she has designed include: a seminar on the rhetoric of first ladies,  the practicum, “theory and pedagogy,” to train student speech consultants who staff the University’s Speech Center, and most recently a first year seminar entitled “The White House Said Today: Rhetoric of the Executive Branch.” In 2003, she received the University of Richmond’s “Distinguished Educator” Award. The National Speakers Association presented Mrs. Hobgood its “Jeanne Robertson Outstanding Professor” Award in October 2005.

In 2007, the Speech Center launched another on-campus event, known as “Forum at the Forum.” Each year, students are asked to propose a key question that becomes the theme of the annual “Forum.” Everyone is invited to participate in the outdoor discussion, held at the Forum outside the Gottwald Science Center not far from the Heilman Dining Center.  The event, scheduled on a weekday in the spring, attracts students, staff and faculty en route to classes or lunch.  A vigorous discussion may ensue on the particular topic, and the Speech Center’s mission–to promote speaking and listening to good effect–is effectively pursued!

A communication consultant, Mrs. Hobgood has served as speechwriter, campaign manager, and consultant in the public and private sector, conducting training seminars for larger corporate organizations and various small businesses seeking ways to improve communication skills in both the workplace environment and the public setting. Her children’s story Yesternight was published in June, 2019.

Past experience includes positions at the White House with Special Programs and the First Lady’s staff, research and writing for the American Revolution Bicentennial Administration, and service as an administrative assistant to a member of the Senate of Virginia.

Named to Outstanding Young Women in America in 1980, Mrs. Hobgood has served on the Board of Directors of Big Brothers and Big Sisters of America and the Young Life organization in Fredericksburg, Virginia. She has also served as PTA President for Gayton Elementary School in Henrico County. The Hobgoods are members of Third Church in Richmond.

Mrs. Hobgood holds both undergraduate and graduate degrees from the University of Virginia. Born in Washington, D.C., she is married to James L. Hobgood. Parents of a son, Dan, a daughter, Jenny and son-in-law Matthew Connors, and grandparents of Christopher, Claire, and Emma Rose Connors, the Hobgoods reside in Manakin Sabot, Virginia. 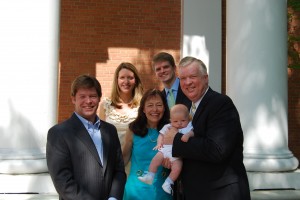