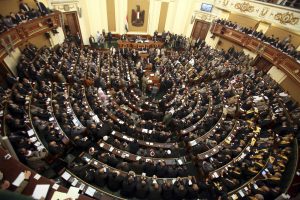 This photo presents an example of what decision-making looks like for the Egyptian government. The politics of Egypt are based on republicanism, with a semi-presidential system of government. The current political system was established following the Egyptian Revolution of 2011 and the resignation of President Hosni Mubarak. 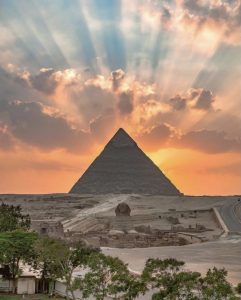 The Great Pyramid and the Sphinx are shown in this photo. These famous structures vibrantly display the beautiful, ancient history and culture of Egypt. Pyramids are constructed as tombs for pharaohs which exemplifies the significance of the afterlife in ancient Egyptian society. 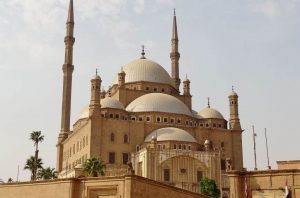 In this photo, a beautiful Egyptian mosque is shown. Islam is the dominant religion in Egypt with around an estimated 90% of the population. Almost the entirety of Egypt’s Muslims are Sunnis, with a small minority of Shia and Ahmadi Muslims. Islam has been recognized as the state religion since 1980. This shows that Islam is an important part of Egyptian culture. 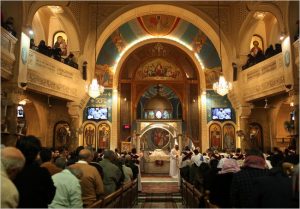 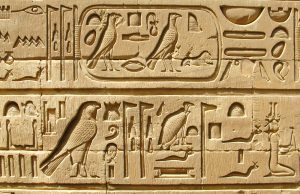 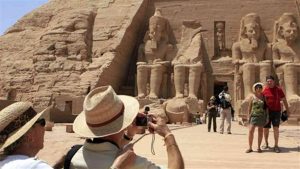 This image portrays some of the tourism that exists in Egypt. Tourism is one of the leading sources of income, crucial to Egypt’s economy. At its peak in 2010, the sector employed about 12% of the workforce of Egypt serving approximately 14.7 million visitors to Egypt and providing revenues of nearly $12.5 billion. 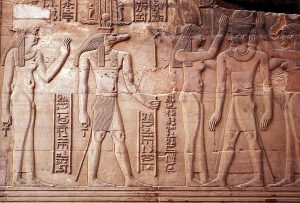 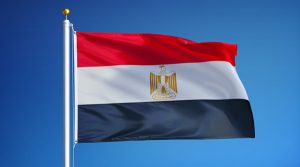 This is an image of the Egyptian flag. The current flag of the Arab Republic of Egypt consists of red, white, and black horizontal stripes. Red represents the sacrifices and blood of Egyptian martyrs, white symbolizes peace, black stands for the dark period of occupation, and the eagle represents strength and power. 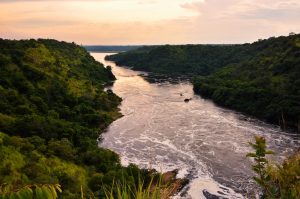 This is a photo of the beautiful Nile River- the longest river in the world. The most important thing the Nile provided to the Ancient Egyptians was fertile land. Most of Egypt is desert, but along the Nile River, the soil is rich and good for growing crops. Today, the river continues to serve as a source of irrigation, as well as an important transportation and trade route. 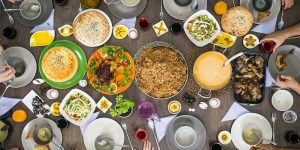 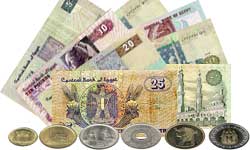 This picture displays what the Egyptian currency looks like. The Egyptian pound is the currency of Egypt. It is divided into 100 piastres, or ersh or 1,000. Obverse designs tend to feature an Islamic building with reverse designs featuring Ancient Egyptian motifs (buildings, statues, and inscriptions). Currency is significant because modern society cannot function without it. 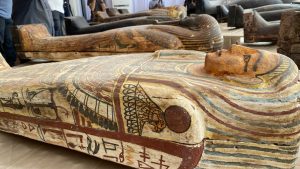 The Egyptians were obsessed by life and its continuation rather than by a morbid fascination with death. The tombs, mortuary temples, and mummies that they produced were a celebration of life and a means of continuing it for eternity. The ancient Egyptians mummified their dead because they believed that the physical body would be important in the next life. Thus, preserving the body in as lifelike a way as possible was the goal of mummification. 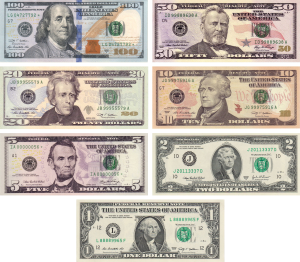 The U.S. dollar was first designated as the world’s currency in the 1944 Bretton Woods Agreement, and it is the most powerful currency in the world. It’s backed by the world’s third-largest economy, the United States of America. The strength of the U.S. economy supports the dollar’s use as a global currency. 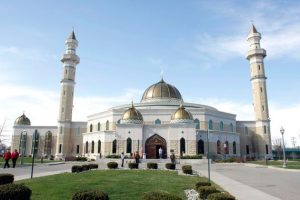 This is a photo of an American mosque. I wanted it to show how there is religious freedom in America even though many people associate Christianity with America. In the United States, freedom of religion is a constitutionally protected right provided in the religion clauses of the First Amendment. This also shows a similarity between America and Egypt that there is an Islamic following in both countries. 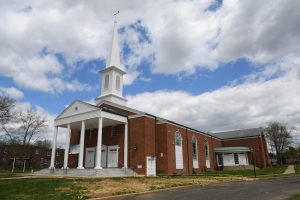 This image shows a Baptist church. The most popular religion in the U.S. is Christianity, comprising the majority of the population (73.7% of adults in 2016). Protestantism is significant in America because the Reformation sparked Western notions of representative government and equality and provided the ideological justification for modern banking and capitalism. In short, it’s impossible to unravel America’s Revolution, culture, or economy without taking Protestant doctrine into account. 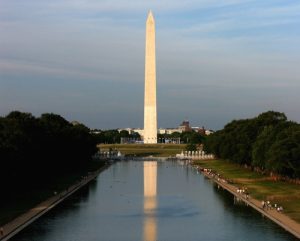 The Washington Monument is a renowned monument in America that has been the setting of many important speeches and historical moments. Built in the shape of an Egyptian obelisk, evoking the timelessness of ancient civilizations, the Washington Monument embodies the awe, respect, and gratitude the nation felt for its most essential Founding Father. 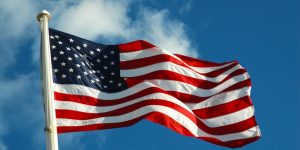 The American flag has stood as a symbol of freedom and justice for over 225 years. The stripes represent the original 13 Colonies and the stars represent the 50 states of the Union. The colors of the flag are symbolic as well; red symbolizes hardiness and valor, white symbolizes purity and innocence, and blue represents vigilance, perseverance, and justice. 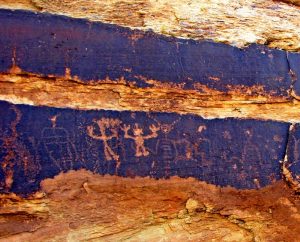 This image shows petroglyphs created by the Indigenous people who existed in America before pilgrims and colonizers arrived. When European explorers arrived in America, Native Americans did not communicate through writing as we know it. Instead, they told stories (oral histories) and created pictures and symbols. This is a significant part of American history because it shows that there were small tribes/ civilizations in America at an early time. These petroglyphs are also reminiscent of Egyptian hieroglyphs. 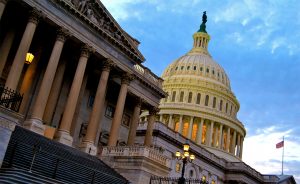 This is a photo of the Capitol Building where many decisions are made for the United States; the House and Senate reside here. America is a democracy. Supporting democracy not only promotes such fundamental American values as religious freedom and worker rights, but also helps create a more secure, stable, and prosperous global arena in which the United States can advance its national interests. 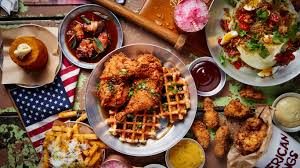 America does not have any particularly traditional American food because the country has a very diverse population with many different cultures and food. American cuisine was influenced by Europeans and Native Americans in its early history. Today, there are a number of foods that are commonly identified as American, such as hamburgers, hot dogs, potato chips, macaroni and cheese, and meatloaf. Americans are also known for consuming a large number of fried foods. 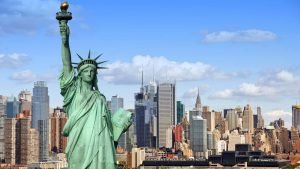 This image represents the tourism that exists in the United States. Tourism in the United States is a large industry that serves millions of international and domestic tourists yearly. Foreigners visit the U.S. to see natural wonders, cities, historic landmarks, and entertainment venues. Americans seek similar attractions, as well as recreation and vacation areas.

This drawing represents a significant event in American history- the Civil War. The Civil War had a greater impact on American society and the polity than any other event in the country’s history. It was also the most traumatic experience endured by any generation of Americans. At least 620,000 soldiers lost their lives in the war, 2 percent of the American population in 1861. 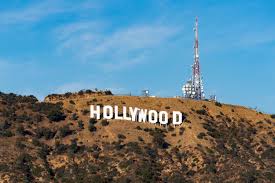 Hollywood is a neighborhood located in Los Angeles, California, that’s also synonymous with the glamour, money, and power of the entertainment industry. As the show-business capital of the world, Hollywood is home to many famous television and movie studios and record companies. America is extremely influential in the entertainment and media industry.

New York City was the capital of the United States from 1785 until 1790 and has been the largest U.S. city since 1790. The Statue of Liberty greeted millions of immigrants as they came to the U.S. by ship in the late 19th and early 20th centuries, and is a symbol of the U.S. and its ideals of liberty and peace. New York City is also one of the most populous cities in America. It is also a huge showcase of diversity in the United States.