SketchUp is a great tool for doing 3D design.  It has a very low learning curve and can be used to create accurate designs.  Moreover, there are many plug-ins for use with the app to increase functionality and interoperability.

SketchUp is available for download from their site, but it is also available on the computers in the Technology Learning Center located on the 3rd floor of Boatwright Library.

There are many sources for tutorials for using SketchUp.  The best video tutorials are the official ones originally from Google and now maintained by Trimble (visit http://www.sketchup.com/training/videos.html ).  Also, there are tutorial files that can be opened in SketchUp and walk you through learning various skills.  They are available through the 3D Warehouse (visit http://sketchup.google.com/3dwarehouse/cldetails?clid=36e1fa0d054a15eecc725c514c21d975 ).  The University of Richmond subscribes to Atomic Learning tutorials for its community; however, those tutorials are only up to SketchUp version 7 (visit http://is.richmond.edu/training/tutorials.html ).

The plug-ins that are installed and are recommended for greatly increasing the utility of SketchUp include:

UR CTLT 3D Printing in the News

We were visited today by Richmond’s own WTVR senior reporter, Wayne Covil.  He interviewed me as part of a story about the 3D printing of guns (see earlier post for background). Bottom-line, current low-cost 3D printers are not quite ready to print guns, but they are coming.

Posted in @UR, Design, In the News, Printing | Comments Off on UR CTLT 3D Printing in the News

Both sides of the gun control debate and the 3D printed gun debate, more specifically, could discuss the issue all they wanted in a theoretical framework until now.

Cody Wilson, the UT Austin law student who made a lot of press regarding the controversial development of 3D printed guns (starting with an AR-15 lower receiver), has printed his first successful gun in the way of a single shot pistol named Liberator.  He posted a Youtube video demonstrating the firing of the gun as well as promotion of his Defense Distributed organization’s 3D design sharing site, defcad.org .

It is difficult to imagine the academic purpose for printing a weapon, but I am sure we will  work with university administration if/when a 3D printer is added as a production service on campus to prohibit such creations.  For context, the current CTLT printers (two Solidoodle printers and one Makerbot printer) are not going to be used to print a weapon, and more importantly, it should be noted that anyone with a low-cost printer should refrain from printing or trying to use a 3D printed gun.  If nothing else, the manufacturing tolerances for low-cost 3D printers is insufficient for producing anything more than a deathtrap for the operator let alone anyone in the line of fire.

Furthermore, our research into online printing services such as Shapeways and i.materialize show that their sites prohibit such weapons.

Of course there have been ways for people to make firearms without a factory for hundreds of years, but 3D printing is reducing the barriers to fabrication.  The prediction is that 3D printing will become more commonplace, cheaper, more reliable, and more accurate.  Therefore, Mr. Wilson has opened up a can of worms that needs to be addressed as this test demonstrates a time in the near future when people will be able to 3D print fairly dangerous objects.

Many in the low to medium-cost 3D printing world are cautiously optimistic to the initial hype for a printer that is promoted by the makers to print full color objects.  The manufacturer, botObjects, will be releasing more information in June, but for now, there is just enough to tease. Solidsmack has an interview with the two company founders that provides a little more information than the company web site.

Basically, the printer will use five colors (probably cyan, magenta, yellow, black, and white) of PLA plastic in cartridges, mixing the colors to get the true color needed in the object in the spot currently being printed.  This is hardly built upon current 3D printing technologies and basically becomes its own category.  The most popular method currently for producing full colors is to print the object with powder and glue and run an color ink jet process over the printed object to apply the coloring.  To those in low-cost 3D printing, they will also quickly note from the product information that the printer will be able to self-level the print bed.  This is a tedious chore that current printers require the operator to do, and in most cases, it is completely done manually.

Posted in Design, In the News, Printing | Comments Off on Full Color FDM Printing?

The Winkleman Gallery in New York is currently exhibiting works that integrate 3D printed forms into more traditional art. To the 3D printing expert without artistic training, I can at least see a good opportunity to repurpose the plastic parts from unsuccessful 3D printing jobs.

Posted in Design, In the News | Comments Off on 3D Printed Art

Updates on Working with the Solidoodle 3

In the video below, I describe some of our recent activity regarding optimizing printing for our Solidoodle 3 3D printer including:

This is honestly not a late April Fools joke.  TED Fellow Skylar Tibbits gave a TED talk to describe the research and development partnerships his MIT lab is making to develop 4D printing.  What is 4D printing?  Well, you should watch his TED talk below, but basically, the first 3 dimensions are the normal ones for 3D printing (X, Y, Z for Cartesians among us), while the fourth represents an automatic change in the object that is built into it while printing but takes place later.  So you might say the dynamics or flexibility of the object causing the object to re-form over time suggests time is the fourth dimension here.

The idea of printing something with the constraints of the 3D printing process that could later deform and form into a target configuration has great opportunities.  However, the software tools are in their infancy in this area, needing much work to be done by hand and there are relatively few printers that can use multiple materials in the process.

Posted in Design, In the News, Printing | Comments Off on 4D Printing? 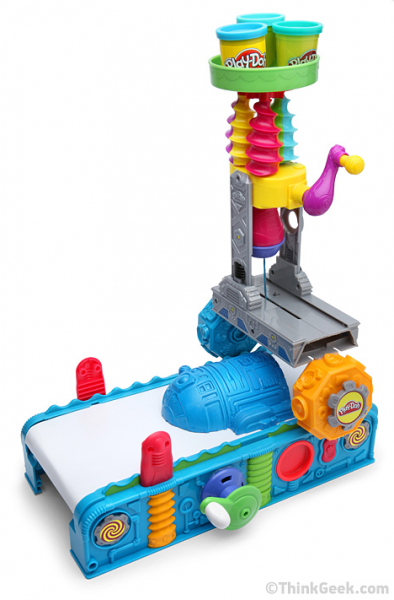 [Update: this was an April Fools joke perpetrated by thinkgeek and disseminated by 3D printing enthusiasts]

I can’t wait to review the first Play-Doh 3D printer. It’s another “I wish I though of that” product as it gets kids thinking about 3D design and printing without the complexity of other low-cost 3D printer (see other posts on this blog about the effort needed to maintain and operate a 3D printer).

Posted in In the News, Printing | Comments Off on Must Get One

Getting Great Prints with Enclosure on Solidoodle 3 Printer

As mentioned previously, I’m enclosing our Solidoodle 3 printer to try to get better results through minimizing warping and parts not sticking.

As a slight aside, the Cubestick on glass is now working very well for sticking.  The trick is to wash the glass plate with low-residue soap, dry it, and apply a fairly thin but full coat of the Cubestick glue.  By itself, the Cubestick has not been perfect but mixing that with the enclosure described below seems to have eliminated pulling up, and I will soon be testing a few tall prints to see if delamination warping is improved.

I admit that I did not design the enclosure.  We are using paeltz’s design that was posted on soliforum March 4th.  I printed out all the parts, bought the materials, and began assemblying.  I did not really modify anything but added an 80mm exhaust fan with carbon filters that I will soon add to thingiverse.  Even without attaching all of the weatherstripping yet, I am already getting stable printing temperatures in the enclosure of 32C. Once I decided to use an enclosure, I changed my mind from having an exhaust that would use the spool holder (and needs a large hole drilled into the rear metal wall of the printer) to using a spot on the plexiglass.  Since paeltz’s deisgn included a riser section (to allow room for the filament coming into the extruder assembly), I figured I could incorporate it there.  Then, I simply decided to replace one of the plexiglass pieces in paeltz’s design so I would not need to have a lot of cuts and shaping in the plexiglass.  Lastly, I chose to locate the filter inside the printer so it would not get in the way of the spool or electronics and would even be able to passively filter the area when the fan is not powered.  I had a lot of 1/4″x1/4″ cylindrical neodymium magnets so I decided to use those to hold all the parts together but make them easily removable.  Again, the details will be in a forthcoming thingiverse submission.

Up until now, I had used a simple adapter and mount for locating our Logitech webcams onto the frame for the Solidoodle 2 and 3.  The enclosure would get in the way so I figured I  would try another way to mount the webcam and test whether their is a drop in photo quality when the webcam is directly attached to the vibrating printer or from below.  I simply made a bunch of 3″ sections that had male and female ends to allow adjustable height.  Also, I made the bottom piece snugly attach to the cart holding the printer, and I adjusted the top piece to allow connection of different webcams.  In the end, I don’t know if what I have is improved over having something simply suction cup-mounted to the front section.  If it grows on me and/or I receive lots of requests, I’ll post it to thingiverse.

Posted in @UR, Design, Printing, SketchUp | Comments Off on Getting Great Prints with Enclosure on Solidoodle 3 Printer 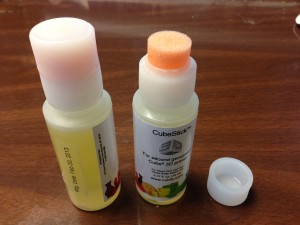 We’ve had some trouble with prints sticking to the print bed over the last year and a half since we acquired our first 3D printer.  It’s mostly a matter of choice.  It’s not that we want poor adhesion, but we have made the decision to run our printers with a glass plate (with the exception of occasionally running the Thing-O-Matic with its conveyor belt).  The reasons include:  being able to quickly switch the glass plates to start the next job, the glass plate is more flat than the aluminum print bed, the glass covers up the holes above the adjustment screws, and glass is cheap (we buy simple plate glass from big box stores for about $2 for several beds (and they cut the glass to size for free).

The Cubestick comes with a sponge applicator but it goes on the glass similar to a gluestick. After the print job is done, I’ve noticed that the parts pop off the plate by themselves if the plate is allowed to cool completely to room temperature and is easily pulled off if left warm.  One can wash off the part (if it has not already come off), glue residue, and skirt/outline bead of plastic simply with tap water.

So far, I would say it is much less messy than using ABS-acetone slurries but obviously more work than if polyimide tape is working for you without anything more.  My problem is that the same parts warp, pulling away from the print bed during printing, with the Cubestick as with other techniques.  I am in the midst of assemblying an enclosure for the Solidoodle 3 which should serve to keep it warm and stable inside the build volume (thanks to paeltz at soliforum for the design).