(60-63) Evander was an Italian king who settled on the Palatine hill, which was the future site of Rome.  In Aeneid Book VIII, he hosts Aeneas to a feast and recounts  Hercules’ heroic visit and subsequent veneration there (Duff, 1962). Hercules is a son of Jupiter, Roman hero, and god, famous for his twelve labors. The “lesser guest” refers to Aeneas himself, the Trojan-born hero considered to be the founder of the Roman race, son of Venus and Anchises. Aeneas could be considered the “lesser guest” for a few reasons. First, Aeneas is the son of Venus while Hercules is the son of Zeus, and Zeus was considered to be the most powerful god.  Aeneas could also be considered the lesser guest by the house of Evander because they worship Hercules.

The phrase “one by water, the other by flame” refers to the death of these two heroes.  Aeneas died by drowning in the river Numicius and Hercules threw himself on a funeral pyre after putting on a poisonous shirt (Hardy, 1963).

(64-68) Tibertine: Juvenal had a farm/estate at Tibur, which is located about 30 kilometers north-east of Rome and is modern day Tivoli.  Literary men traditionally had farms in this area known as Campagna, a low-lying area surrounding Rome in the Lazio region of central Italy. This poem lays much stress on direct links with the country, in the tradition of old Rome, and rejection of the city

(73-74) Syrian and Signinum pears: Syrian pears are native to Turkey, Iraq, Syria, Lebanon and Palestine.  They were considered by the Romans to be the best pears. Dalby explains that Syrian and Signinum were catchwords that were used to impress guests (Dalby, 2000, p. 253).

Picenum was a coastal region in Italy famous for both its apples and olives (Duff, 1962).  Martial mentions olives from this region in his invitation poems (Courtney, 2013) and Horace mentions apples from Picenum in his Satirae II, 4, 70 “Piscenis cedant pomis Tiburtia suco” (Hardy).

(78) Curius: M. Curius Dentatus was censor in 272 B.C. and was famous for his part in the wars against the Samnites and Pyrrhus.  Curius was a model of old-fashioned moderation and restraint. Juvenal is alluding to the story of the envoys of the Samnites finding Curius cooking vegetables (Courtney, 2013).

(81) hot cook-shop: Popinae, ‘cookshops,’ were at the heart of lower class culture in Roman society. These establishments were probably the main source from which non-elite could obtain meat. They were primarily the gathering place of the lower class; Juvenal described a popina in Ostia as filled with gangsters, thieves, eunuch priests, etc. (Hartnett, 2017).

(86) consul: A consul held the highest elected political office of the Roman Republic (509 to 27 BC) and was the highest ranking position in the cursus honorum.  Two consuls were elected each year to serve together for a one-year term. After the end of the Republic and the beginning of the Empire (27 BC), the consuls became symbolic representatives of Rome’s republican past.  Because of the link to the past, it is significant that the word consul occurs here in the poem.  Also, becoming a consul, commander, and dictator are some of the highest ranking positions one could have in Roman society and this high ranking, imagined ancestor still enjoyed simple foods and furniture.

(90-91) Fabii, Cato, Scaurii, Fabricius: All of these names refer to distinguished censors (Hardy, 1963). Here is more information on the Fabii.

(92) censor: “Censor, plural Censors, or Censores, in ancient Rome, a magistrate whose original functions of registering citizens and their property were greatly expanded to include supervision of senatorial rolls and moral conduct.” (Britannica)

(93-95) Trojan-born princes: Not even eastern royalty cared so much about how extravagant their furniture was as the Roman society the Juvenal describes in this satire.

(96) couches: Romans dined on couches that were typically arranged in a triclinium, or three couches.  Couches were a staple of upper-class dining in ancient Rome.

The couch and footstool pictured below are from the imperial villa of Lucius Verus (co-emperor, A.D. 161–169), on the Via Cassia outside Rome, reassembled from fragments.  “On the couch legs are friezes of huntsmen, horses, and hounds flanking Ganymede. On the footstool are scenes of winged cupids and leopards; and on the sides of the bed frame, the striking lion protomes have eyes inlaid with glass” (Metropolitan Museum). 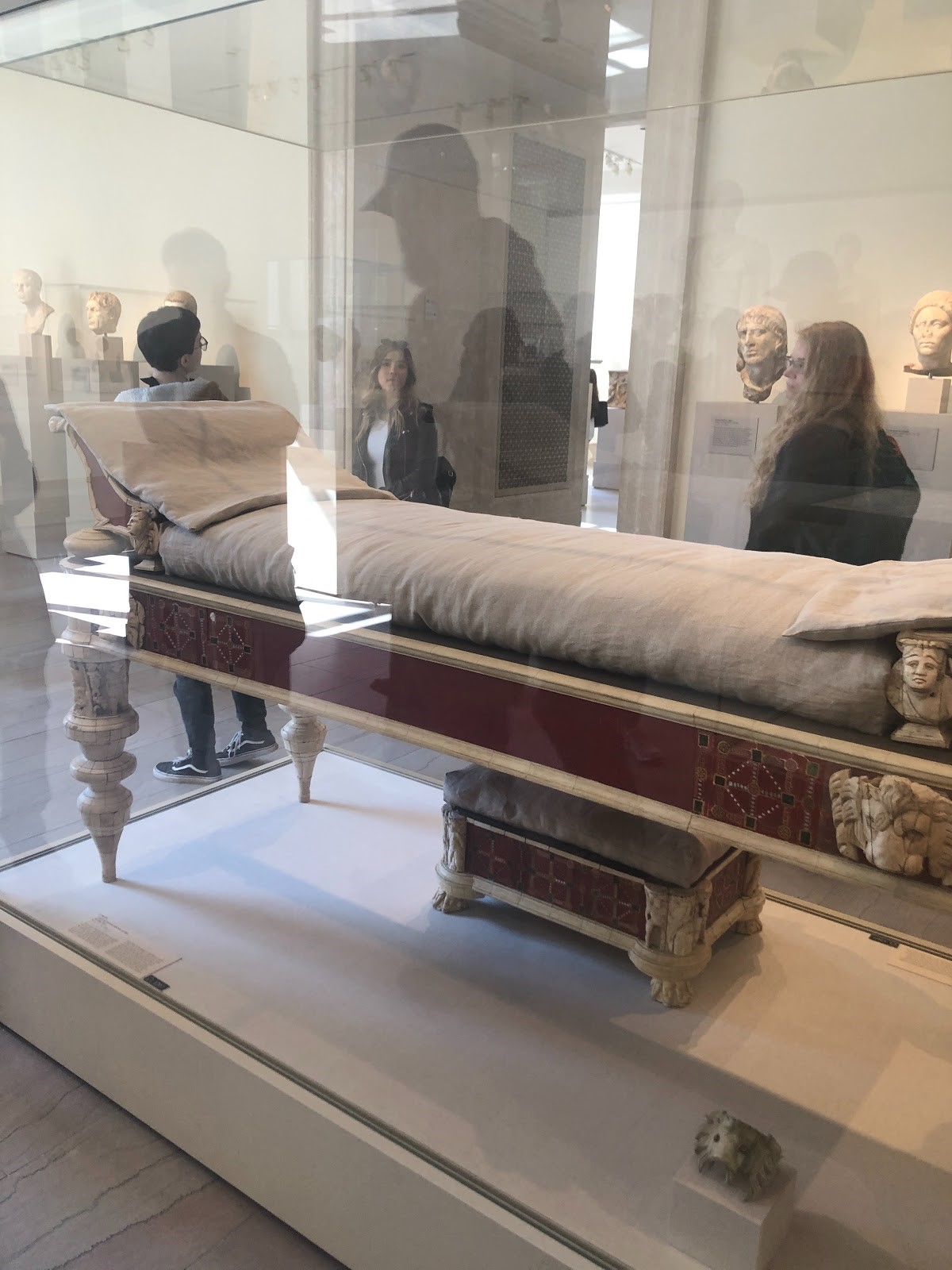 (123) rampant leopard: The drawing below, an original sketch by Lee Tyler, is an artist’s conception of the “round table, held up by a rampant leopard made of ivory, with large, open maw,” described in these lines with the leopard in the specified position holding up the table top.  The base of the table is very ornate and made from valuable material, emphasizing the importance placed on the lavish setting for obtaining enjoyment from a meal.

(124-126) The town of Syene, modern Aswan on the Nile River, was on the frontier of the Roman Empire, serving as the “gate” to the rest of Africa, and the Moors are associated with North Africa, specifically the Morocco area (Hardy 1963, 262-263). The Nabataeans were native to Arabia (Duff 1962, 372). Juvenal invokes the homelands of the Moors and Nabataeans as potential sources of ivory, but elephants (“beasts”) are not native to either place. Additionally, elephants do not put down their tusks when they get too heavy for their heads. Juvenal’s apparent ignorance about the production and sources of ivory reflects a kind of apathy about the origins of the valuable things that the elite Romans are able to obtain. No one cares enough to get the facts straight about ivory, like no one cared to think about the turtles that were eventually turned into arm-rests (94).

(131-134) knives made of bones: the handles were made of bones rather than ivory.  Bone is still a luxurious material, however it is not as costly as ivory. Juvenal is writing a satire, so it’s as if he is saying, “I have nothing in my house made of gold, it’s just silver.” Below is an image of the bone-handle of a knife with a lion’s head carved into the end.

(147) Phrygian or Lycian: Apparently, slaves from these regions (in modern Turkey) were highly sought after and expensive (Wilson 1903, 117).

(172) clattering pieces of fired clay: The reference is probably to makeshift castanets achieved by hitting pieces of broken pottery together to make noise. The image below shows a dancer holding more formal castanets.

(175) Lacedaemonian marble floors: Greenish marble stones imported from Laconia (the region of ancient Sparta) would have been very expensive tiles for the floor in a dining room (Hardy 1963, 265).

(180-181) The works of Homer and Vergil would have often been read aloud as the dinner entertainment.  Homer was known for the Iliad, which is an ancient Greek epic made up of episodes that describe the Trojan war and the emotional journey of Achilles, and Vergil was known for the Aeneid. In the phrase, “making dubious palm,” palm refers to victory. Describing the songs of Vergil, the phrase suggests that Vergil’s songs will be competing with Homer’s and that it is unclear who will win out in the comparison of the two great poets.

Sources
Courtney, E. 2013. A Commentary on the Satires of Juvenal. Retrieved from https://escholarship.org/uc/item/4jh846pn.

Dalby, A. 2000. Empire of Pleasures. Luxury and Indulgence in the Roman World. New York: Routledge.