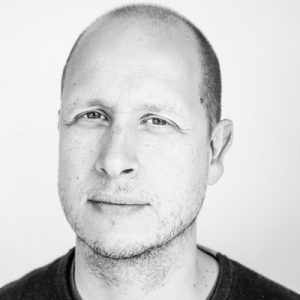 Vegas Tenold is a Norwegian journalist who currently lives in Brooklyn and covers the American far right.

Tenold is a graduate of Columbia University’s School of Journalism. He has been published in The New York Times, Rolling Stone, New Republic, and Al Jazeera America. In addition to the far right, Tenold has covered conflict in central Africa, the Middle East and Russia. Tenold’s pieces often profile the people involved, introducing them as characters, a style he repeats in his work covering the far right.

Tenold covered the Anders Breivik case in Norway. Breivik is a member of the Norwegian far right who killed eight people with a van bomb and shot and killed 69 children at a political youth camp. This case would later influence Tenold’s choice of subject for his long-form journalism.

Tenold is the author of “Everything You Love Will Burn: Inside the Rebirth of White Nationalism in America.” He spent six years embedded in white nationalist groups, much like being embedded with a military unit, and attended the Unite the Right rally in Charlottesville, Virginia, in August 2017.

He says that he is “fascinated by fringe movements,” which, when combined with his past coverage, led him to this subject matter. Tenold told Kirkus that he found a website for a neo-Nazi group in Greenpoint and Williamsburg, and that the group answered his email, which was the start of his six-year project. Tenold spent time with the Ku Klux Klan, the National Socialist Movement, and the Traditionalist Workers Party, whose leader, Matthew Heimbach, he describes in detail in the book.

Tenold has written an article about his relationship with Heimbach in which he described a moment when Heimbach asked Tenold why he had never asked him about the Holocaust, and Tenold realized he might have been getting too comfortable with Heimbach.

Tenold is honest about his experience in other ways. He has said his level of access was largely possible because he is a white man, and a Nordic one at that. As a Norwegian socialist with political views on the far left, Tenold frequently debated the white nationalists, which he said helped keep him sane.

Tenold ends his book with a warning: white supremacy doesn’t need these men to thrive. He argues that it is embedded in American politics and culture already.

Katherine Schulte: What do you consider terrorism?

Vegas Tenold: I don’t know. I mean, it’s a politically motivated act of violence, isn’t it?  I’m sure there are better definitions out there. That was just what popped in my head.

KS: Do you think that the far-right resembles or shares any characteristics of terrorist organizations?

VT: The far-right isn’t one thing — it’s a broad spectrum of groups who agree on very little. I would say that the language and methods of the far-right in America are largely political.  The whole violent terrorism tendencies of the ’90s, with Timothy McVeigh and Bob Roberts, have to a large degree gone away. Most examples of far-right terrorism and anti-government terrorism have been carried out by so-called “lone wolf” terrorists.

KS: Did you witness any acts of terrorism while you were reporting on nationalist groups?

They’re all different and they all more or less hate each other. When we talk about the KKK and the Skinheads and the traditional garden variety neo-Nazi, that is white nationalism 1.0. Now, 2.0 is Richard Spencer, Mike Cervich and other actors in the alt-right. I don’t think “alt-right” is a good term, but that’s kind of what we mean. Just because two groups are 1.0 or 2.0 doesn’t mean they necessarily agree. In fact, most groups and actors disagree on most things and have a hard time coalescing around a single message.

KS: You said you didn’t like the term “alt-right.”  How do you choose your terminology when covering these groups?

“Alt-right” is a term that was invented by Richard Spencer, so I feel like we’re doing him a pretty big service if we’re using the term he coined for it. The term “alternative right” implies that there’s something new and alternative about their politics when it’s really the same ideological platform that we’ve seen peddled by various people on the far-right since the 1950s, and even before that. So the “alt-right” is a term that was helpful to lazy journalists and people who kind of felt that we all knew what we were talking about. Terminology matters if you’re going to write about it. If you’re covering the far-right, then at some point you’re going to be writing about actual neo-Nazis — people who subscribe to the ideology and politics of Adolf Hitler. If you’ve already called KKK members neo-Nazis, then you really don’t have a precise term for the national socialists. You have to be rigorous about these things. I recognize that to an outsider, or just to a person on the street, it doesn’t really matter. In terms of us writing about it, we should try to be as precise as we can so that we can bring a certain level of understanding to our readers.

The far right is just a helpful catch-all. It’s not that precise, but at some point you’re going to need a broad term to describe the movement, because you can’t just list everyone in the movement. So people call it the far-right, the radical-right, the white nationalists or the white-power activists, and those are just catch-all terms for a wide variety of different groups.

KS: How did you gain access to these far-right sources for your book and maintain those relationships for six years?

Well, I was honest about who I was and what I was doing. I guess you could go in undercover, and spend some time there, but that would get exhausting. I have an ethical problem with doing that. I realized that if I was going to spend any amount of time there and get access to these people, I would have to give them a little information about who I was. I had to be open with who I was and what I believed so that we could get a real dialogue going. It helps if they know where you’re coming from. I was publishing stuff the whole time I was writing this book. If they had been surprised by the way I approached the subject or my own view, then I would have lost that access pretty quickly. By being open about how I disagreed with them and that I came from a completely different political background, I was able to maintain the access I had. That level of honesty was helpful. The main way to develop these sources is kind of just time and a little bit of humanity.

KS: You profiled Matthew Heimbach, a white supremacist leader, and received some criticism from people who said you gave him a platform to spread his message. Do you think these criticisms have any merit?

I think that’s a bullshit argument. I’m a journalist. I can’t just go around interviewing people I agree with. I would argue that the most important role of journalism today is to provide understanding and insight into parts of the world that maybe we don’t understand yet. To do that, you can’t just walk around talking to nice people. I think the whole “giving a platform to hate” is a bit of a cudgel used by people who don’t want to read about things they find offensive. You can quite easily write about people whose views are abhorrent in a normal way without giving them a platform. You just have to push back, you just have to do your job as a journalist and be critical the whole time.

KS: You have talked about the personal difficulties of writing about white supremacists, so how did you handle talking to these groups for six years?

I didn’t spend six years doing it. It was a weekend thing. I got to go home to Brooklyn and be around my friends during the week. I don’t think anyone could handle six years without losing their minds. Again, it helped me that I was able to be honest with who I was and what I believed, so that when it became too much, I could say: “You guys are fucking crazy. This is stupid and hateful.” It was a bit of a release for me to be able to fight back at the level at which I fought back, which would sort of escalate by how long I spent with them. If I had to be undercover and pretend to agree for days on end, then I would truly lose my mind, I’m sure of it.

KS: You warn that white supremacy is latent in American politics already, using examples like our prison system. Do you think it’s part of your job to defeat white supremacy or just explain it? When do you report the facts versus analyze or contextualize them?

Oh man, that’s a tough one. I don’t think you can go into something believing that you’re going to defeat it, because you’re going to set yourself up for a big disappointment. I think you have to be realistic about the power you have. Some journalists have more of an agenda than others. Some just report the facts, some try to contextualize it within an agenda. I obviously have an agenda in that I vehemently disagree with white nationalism. I think it’s an abomination that we should get rid of, but I simply don’t believe my book will defeat national socialism or racism. If my book has shed a sliver of understanding about what drives racism, I’ll quite happily take that, but for me, I think journalism is mostly about finding something that fascinates you that you’re curious about. If you feel the need to understand it for your own sake and then maybe explain it for the sake of others as you go along, I think that’s a good thing. I’m certainly not on any crusade to change the world.

KS: What role should the news media play in violent crimes, and would you ever give concessions to law enforcement, or do you see yourself as a third party?

I think that’s on a case-by-case basis. I think no one should be able to compel journalists to talk. Source protection is important. It’s important to maintain neutrality. I think, at the end of the day, it’s up to the journalist and the relationship with the source. I’ve been contacted by lawyers in the aftermath of Charlottesville who I believe are involved in a lawsuit against the organizers of the Unite the Right, but I just stay out of that because I think it will hinder my work. It’s not something I’ve thought very much about because it really hasn’t been an issue in my reporting. I’ve reported my fair share of violent incidents, but it hasn’t really come up.

KS: How often do you follow leads you find on social media?

Very, very, very little. I sometimes use Twitter to find people and send them messages. I use GAB, the hateful cousin of Twitter, to find people. I don’t find social media very present or helpful. It’s more of a nuisance that you’ve sometimes got to deal with. So I really haven’t used it at all.