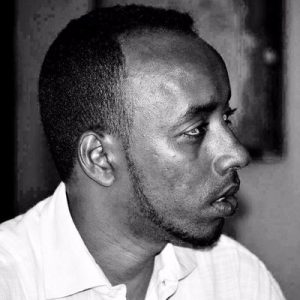 Omar Nor is a freelance journalist based in Mogadishu, Somalia. He primarily covers conflict that erupts in the heart of his country from its main terrorist organization, Al Shabab. Along with contributing and writing reports on his country for organizations such as CNN, Nor also works as a fixer and photographer. He believes he owes it to his country to spread the word about what is happening every day.

While working as a fixer, Nor is in charge of setting up foreign reporters with sources in his network and translating for them if they cannot understand what is being said. In order to write his own articles, Nor is always at the scene taking photos and talking to as many sources as he can. He works with many reporters in his country, some of whom he considers to be his closest friends. He believes that working alongside his friends can definitely have its downfalls, and he acknowledges that he has been victim to some of the challenges of covering such a difficult and upsetting topic.

Many of Nor’s friends have died from terrorist attacks as well as retaliation from Al Shabab. Nor himself has received multiple death threats sent to his phone from members of the terrorist network. He knows that there are risks that come with covering these events but believes that they are essentially the only thing happening in his country on a regular basis. Nor wants to gain attention for these incidents, and since he has grown up in the country he feels that he has a compelling duty to cover it.

Nor does not deal with members of Al Shabab in-person because of the fear of death and violence but he knows that they are the main characters of his stories. This is why he is on the ground every day, waiting for another attack so that he can get as much information as possible before writing a story. Sometimes a single event can be spread out over several months at a time.

In a country with so much conflict and not a lot of security, Nor is working under large amounts of pressure to put out intriguing and important stories about his homeland, ultimately working to get Somalia more international recognition.

Sophie Pilkington: What is the bulk of your work as a freelance journalist in Mogadishu and Somalia?

Omar Nor: I cover different stories that make sense for international news organizations. There are many journalists working on the ground like me, and many are freelance journalists.

SP: You’re a professional journalist, but your Twitter profile also states that you are a fixer. Can you describe what being a fixer entails?

ON: As a fixer, I help foreign journalists and other people coming to Mogadishu for work. I also work with CNN other international media so that I can send them stories about Somalia.

SP: You write for CNN a lot. Are there any rules that CNN has put in place in terms of your writing and reporting on certain organizations or attacks?

ON: Yes, I’ve been working with CNN for many years. They have strict rules throughout their organization, but I’m just a freelancer and not a journalist employed by CNN.

SP: Are there negatives aspects to being a fixer as well as a journalist?

ON: There are threats from within the country, not outside. There have been threats on my life.  The threat is always there, and the militants don’t like people working with the foreign people on the ground. They just sent a death threat through my mobile messages. I chose this field because it’s the only option I have to make money for my daily life as there is a scarcity of jobs in Somalia. It’s not good or bad. I don’t have another work.

ON: Yes, they don’t like what I’m doing. Al Shabab–they are the men who are threats to Somalia.

SP: Why have you chosen to write about these attacks and events?

ON: In a country that’s devastated by conflict, most of the stories are conflict-related stories. The international media likes these stories too.

SP: Are there any specific attacks that stand out in your mind as major events?

ON: There have been a lot of attacks in Mogadishu, but the worst was the Oct. 14 attack. There was a hotel siege in Mogadishu last year that was also huge.

SP: What’s one of the worst situations you’ve had to cover on the ground?

ON: The Oct. 14 Mogadishu attack and the resulting situation that has been going on for months. We have been on the ground every day, waiting for stories about missing people and people who were under the debris or cobble. There have been a lot of stories. I lost several friends while covering these incidents. Some have been assassinated.

SP: Were these friends who died killed in the blast of an attack?

ON: Some were killed near the blast while we were together, covering news. And some have been shot by Al Shabab militants for covering these attacks.

SP: When you lose people close to you, how do you put yourself in a mindset to write the story when it has been so emotional for you?

SP: Have you ever been at the site of an explosion or an attack? If so, have you ever felt that you’ve been put in an unsafe situation?

ON: Yeah, I have been several times. The latest was the Oct. 14 car bombing in Mogadishu, which claimed the lives of 500 people. There are a lot of problems, and this is a country that has been faced with much conflict. Living in Mogadishu is very difficult, especially for journalists who cover the stories on the ground. The problem is a part of our daily life.

We are living in a country that does not have the best security. We have to watch out for our lives every day.  We live in the city that is prone to attacks. It’s vulnerable, everyone is vulnerable.

SP: Who do you go to first when an attack happens?

ON: I live in Mogadishu, so when an attack happens in the city, I go directly to the area where it took place because I’m also a photographer. I want to shoot some pictures as the events happen. Initially, I only talk to the police and security personnel.

SP: How much research do you do for your stories?

ON: I do research before I write the article. I talk to several sources: police, medical sources, witnesses and sometimes I get in touch with the other journalists for other information. That’s what I do every day before writing.

SP: Do you have a plan or outline of how you write about breaking news events for these kinds of attacks by Al Shabab?

ON: We get the breaking news out very fast, and then the updates will come next.  We get all of our initial information from the site of the attack. Then, we continue the news until the story dies.

SP: You’ve written about a lot of attacks, and a lot of them have been linked with Al Shabab. Have you ever interviewed a member of that organization?

ON: This is a terrorist group that attacks everyone in the country. I don’t deal with them or contact them because of fears for my sovereignty and life. We usually get information from sources connected to the group and certain media outlets, which usually broadcast their propaganda and stories.  They usually send out their messages through the internet as well.

SP: Do you know why Al Shabab has chosen to attack Mogadishu so frequently?

ON: Yes. That’s clear. They want to show their power and their presence. They concentrate attacks in Mogadishu because it is the city of the federal government of Somalia. They don’t usually carry out car bombs in other cities in the country.

Also, Mogadishu houses a lot of African Union peacekeepers and a lot of foreign agencies. Mogadishu is the heart of the country, so when they are able to, they carry out their attacks there.

SP: Have you ever felt as if you’re promoting the group and spreading propaganda and messages for Al Shabab when you write about them?

ON: No, I feel that I’m reporting impartially. I cover both sides in the conflict.