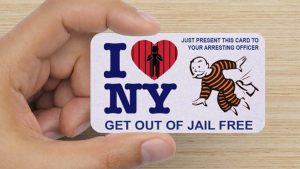 In April of 2019 New York’s Governor, Andrew Cuomo, signed sweeping bail reform into law, the law was set to take effect January 1, 2019.[1] Just three months after taking effect, in April of 2020, that law was gutted[2] after a campaign by multiple State officials against the legislation they had previously supported.[3] What happened over the course of these three months? A valuable lesson was learned by New Yorkers, and all those watching: public safety matters.

Bail reform as an issue in New York became a point of contention after the case of Kalief Browder was made public.[4] In 2010, Kalief Browder was arrested as a 16-year-old for stealing a backpack and was sent to Riker’s Island after not being able to pay his $3,000 bail.[5] For three years, Mr. Browder sat as his trial date was routinely post-postponed.[6] For two of those years, Mr. Browder waited in solitary confinement.[7] Finally, in 2013 the charges were dropped, but in 2015 Kaleif Browder took his own life.[8]

This tragedy, along with a push to end bail because it privileges wealthier offenders, led to the legislature taking up the issue of bail reform in 2019.[9] The movement gained certain high-level supporters, such as Governor Cuomo, who had openly pledged to “end cash bail once and for all.”[10] This movement culminated in the passage of the “Bail Elimination Act of 2019.”[11] Under this new legislation cash bail was eliminated for all suspects except those accused of misdemeanor sex offenses, criminal contempt charges, and violent felonies.[12] Further, all restrictions imposed on defendants must be explained in writing by the Judge, the Judge may only consider the risk of flight in imposing these restrictions, and the Judge may not consider the risk of “re-offense” when considering restrictions on suspects awaiting trial.[13] In the end, this legislation was expected to eliminate the possibility of cash bail for 90% of all suspects arrested in New York.

While the New York Legislature embraced cash bail reform, many New Yorkers approached the new policy with skepticism. While Judges have been prohibited from considering the “dangerousness” of suspects while setting bail since the 1970s, it has been understood that practically, this has not always been the case. Many opponents of bail reform focused critiques of legislation on this practical stripping of the Judge’s autonomy. For example, in early December of 2019, New York City Police Commissioner Dermot Shea expressed concern about the potential of this prohibition, “When you have individuals that are standing before a Judge and immediately being released, and essentially everyone in the room knows that person is a danger to community, I think we need to look at the system and make sure that Judges can make common-sense decisions.” Additionally, New York stood alone as the only State in the Union that did not allow Judges to consider the risk the suspect would pose to the community if released without bail.[14]

The fears of opponents seemed to be confirmed in January 2020 when the law took effect. In January alone 143 individuals went on to commit 230 additional crimes after being released without bail.[15] Further, in February official crime rates were released and showed dramatic increases in crime.[16] Finally, reports of brazen individual behavior, such as that of Jordan Randolph[17] or Tiffany Harris[18], led to a shift in public support for the legislation.[19] This prompted Governor Cuomo to publicly signal his willingness to reconsider certain provisions in the law.[20]

This reconsideration eventually came in April of 2020, when Governor Cuomo along with New York City Mayor, Bill DeBlasio saw a bill they supported that amended bail reform pass the New Legislature.[21] The revisions have kept the framework of bail reform and still prohibit cash bail for misdemeanors and non-violent felons.[22] However, Judicial discretion has been restored as the definition of violent crimes has expanded and Judges may not impose bail if the suspect committed any crime that led to death.[23] Additionally, Judges may now consider the legal history of a suspect and set bail if they determine that the suspect is a “persistent” offender.[24]

In the end, bail reform remains a controversial topic in New York. However, there is a lesson to be learned from the short time that New York prohibited Judges from legally and practically keeping those likely to re-offend away from the public; public safety matters. Our Judicial system may not be perfect, but it stands in order to protect the citizenry from abuse. Therefore, not allowing the system to determine whether an individual who has already abused the community may do so again is self-defeating and will ensure a backlash by the, now unprotected, citizenry. New York’s three-month experiment is a cautionary tale, and one all people would be wise to learn from.

[17] Jordan Randolph was arrested on a DWI and manslaughter charge after crashing into another vehicle at 135 mph, killing its driver. He was released the next day. Kevin Sheehan & Jorge Fitz-Gibbon, Fatal DWI suspect bragged about bail reform: ‘I’ll be out tomorrow’, N.Y. Post, Jan. 30, 2020,  https://nypost.com/2020/01/30/fatal-dwi-suspect-bragged-about-bail-reform-ill-be-out-tomorrow/.

[18] Tiffany Harris had previously been arrested for assaulting 2 Jewish Women in Brooklyn while saying “Fuck you, Jews.” She was released and assaulted another Jewish woman in Brooklyn, she was re-released despite a hate-crime charge. Andrew Denney & Jorge Fitz-Gibbon, Tiffany Harris arraigned on felony hate crimes – and released again, N.Y. Post, Mar. 3, 2020, https://nypost.com/2020/03/03/tiffany-harris-arraigned-on-felony-hate-crimes-and-released-again/.