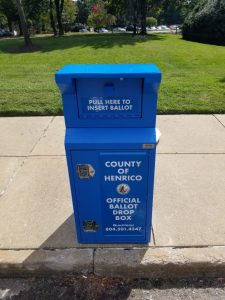 The 2020 regular session of the General Assembly dramatically expanded the role of absentee voting in Virginia.  Absentee voting transitioned from a back-up for those who were unable to make it to their in-person polling place on Election Day to a general expansion of the voting period, enabling any registered voter to vote between the time the ballots are printed and the close of polls on Election Day.

This increase in the ease of voting was largely decided before the impact of the Covid-19 pandemic on the 2020 election had become clear, but it now seems prescient.  With many voters nervous about the prospect of lining up at a polling place to participate in a presidential election in person (historically attracting the highest turnout of the four-year cycle), absentee voting has been enthusiastically embraced by the electorate.

Specifically, the General Assembly abolished the requirement that a voter have an officially approved excuse to vote absentee and extended the deadline by which mailed ballots must be received in order to be counted.  Before this year, an individual had to qualify under one of twelve categories of excuses spelled out in the Code of Virginia.  The individual had to affirm, under penalty of perjury, that the excuse given was true.  This naturally limited the pool of voters who could vote absentee to those whom the legislature had pre-determined possessed a good reason to do so.  In addition to expanding the pool of absentee voters, the General Assembly extended the time they had to return their ballots.  Previously, absentee ballots had to be returned to the general registrar before the closing of the polls on Election Day.  Now, any absentee ballot that is returned before noon on the third day after the election will be counted, so long as it was postmarked on or before the date of the election.  These actions have expanded the number of people eligible to vote absentee and will likely increase the share of mailed ballots that will be counted.

Virginians seem to have embraced these changes, especially in light of the national push to vote by mail during the covid-19 pandemic.  As of October 24, Virginians had cast 1,944,581 absentee ballots—more than triple the number of absentee votes in 2016.  That number represents just over one in every three registered voters in Virginia.  Although it seems likely that many of these voters were determined to vote anyway, “banking,” or locking in, votes in this fashion ensures that the everyday incidents of life, such as illness or simple forgetfulness, do not prevent votes from being cast.

The impact of these changes on election night returns is also unclear.  In Virginia, registrars can begin processing ballots as they arrive, although actual tallying of the results cannot begin until after the polls close.  If a contest is a landslide and many votes are banked early, it is possible that the winner will be known within an hour of polls closing.  If a contest is close and many votes arrive in the days after Election Day, it is possible that the results will not be known until early the following week.  This would represent a break with the trend in recent elections, which have often been called before 10:00 PM on election night. In short, the full impact of expanded absentee voting depends upon how the voters themselves use it.